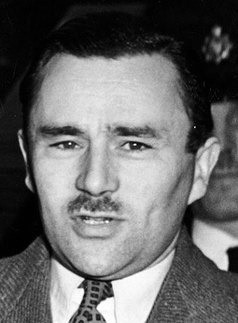 John George Haigh is remembered for his brutal murders of at least six people in England during the early 1940's. He was a charming man who used his skill as a professional conman to convince people into believing he was a successful businessman, and then lure them into a vacant warehouse where he killed them, dissolved their bodies in sulfuric acid, then forged papers to claim their possessions and life savings.

Like many serial killers, Haigh was raised in a restrictive environment. His parents were members of a religious sect, the Plymouth Brethren, and were strict separatists. They taught Haigh that the world outside the home was evil. Thus he lived within a home surrounded by a tall fence that separated him from the rest of the world. Throughout his childhood he went to church, read the Bible and was prevented from participating in any outside activities, including sports.

Even though his grades were excellent and he could have been a talented musician, he left school at seventeen and was apprenticed as a motor engineer. In 1934 he married a woman he hardly knew and began his life of crime.

Haigh forged documents, was a thief, and defrauded people, each time getting caught and sentenced to short prison terms. After his first arrest his wife divorced him.

During his third term in prison Haigh hit upon a scheme that he apparently believed would be a successful crime that he could get away with. He learned that a body could be effectively disposed of in sulfuric acid. Thus he reasoned that if he murdered his victims and placed the body in a vat of acid, there would be no corpse. Without a body he thought, he could never be convicted of the crime.

Such was the mindset of prison inmates that spent their time thinking up "perfect crimes."

After his release from prison in 1944 Haigh sought out and found his first victim. It was William McSwan, a man Haigh knew from an earlier business association. Haigh knew McSwan came from a wealthy family. He murdered McSwan and conned his way into the McSwan household where he killed the man's parents Donald and Amy McSwan. All were dissolved in vats of acid in a workshop Haigh owned in Crawley. He poured the remains, which turned into a blubber, down a drain.

By forging documents Haigh then "inherited" the McSwan estate. He gambled and fretted away the money and soon was looking for another victim.

His next targets were Dr. Archibald Henderson and his wife, Rosalie. They were killed in 1948. Then in late 1949 he murdered Olive Durand-Deacon.

By the time he killed his final victim, the police were closing in. Also the friends and relatives of Ms. Durand-Deacon were suspicious of Haigh.

After police arrested Haigh they searched his "workshop" and found the vats of acid, other evidence of criminal murder, and ghoulish relics that included small bones, dentures, body parts and other personal objects that did not dissolve in the acid. It was such a horrible scene that forensic researchers said they had to wear rubber gloves and cover their arms with Vaseline as they dug through the acid vats.

It was the forensic evidence and Haigh's personal sense of invincibility that led to his conviction on six counts of murder. Haigh actually boasted to police that he could not be convicted of these crimes because there was no "corpus delicti." He believed the old story that without bodies there was no proof of a crime.
​
The court found him guilty, however, and in 1949 he was sentenced to death and executed by hanging at Wandsworth Prison.