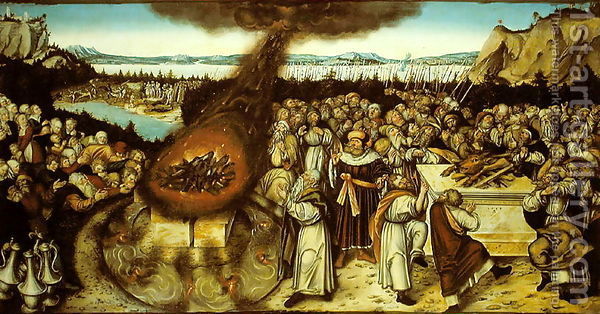 Who Was The Mystery Prophet Elijah?

Throughout recorded human history there have been stories of amazing appearances by comic book type characters who allegedly possessed supernatural wisdom and abilities. Historians made gods out of the most spectacular of them. We believe many of them, including some uniquely gifted people who walk among us today, came in an effort to teach us a correct spiritual pathway rather than allow us to continue wandering in the archaic and twisted routes we have remained mired in for too long.

We remember Jesus, Mohammed, the Buddha and Krishna as the more important “god” figures that stimulated the formation of four of the major religions that dominate world societies even today. But there have been many others that walked this planet. Among them was Elijah, a man who was mentioned in the Bible. He lived about 800 years before Christ.

From everything we know about Elijah, he was a pretty amazing character. He appeared magically from nowhere. He lived without means in the desert. When his work on Earth was finished he was supposedly picked up by a fiery craft and carried off into the clouds.

Elijah fits all of the contemporary descriptions of an alien visitor that appeared among us for a while to fix something that was going terribly wrong.

Most of what we know about Elijah, however, is recorded in the First Book of Kings, in the Old Testament, which means that right off we should be suspicious of the documentation. Even Jewish historians and archaeologists now claim that the old Hebrew kings established a lot of fabricated stories designed to make their origins divine and their position in the world superior to other races in the eyes of God.

As the story was told, Elijah appeared suddenly as a major prophet who was “as a fire, and his word burnt like a torch” during the reign of the Hebrew king Achab, who had strayed from the worship of Yahweh, the one true God.

Indeed, Achab was under the influence of his wife, Jezebel, who directed him to build a temple in Samaria for the worship of the demon Baal. After this, Achab began persecution of the prophets of Yahweh.

It was in that backdrop that Elijah appeared to speak out against Achab and eventually meet the king in a face-to-face contest between their gods. The alter Elijah built was struck by a fiery lance from the sky and consumed by flames. Was that supernatural intervention or a laser beam from an alien craft? Whatever it was, the demonstration convinced King Achab and the Israelites to turn from their wicked ways and bow down once more to Yahweh.

The Bible story then presents a lengthy story about attempts by Jezebel to kill Elijah and the prophet’s constant magical acts that included the slaying of hired assassins by more fiery darts from the sky. In addition to always dodging bullets Elijah also brings a plague on the kingdom.

In the end, Elijah rides off in “a fiery chariot” drawn by fiery horses that parted the clouds. “And Elias (Elijah) went up by a whirlwind into heaven.”

The Old Testament is not the only ancient book that speaks of Elijah. The Book of Malachi states that Elijah’s return will be observed “before the coming of the great and terrible day of the Lord.” References to Elijah also appear in the Talmud, Mishnah and the Quran.

The New Testament speaks of manifestations of both Elijah and Moses during the Transfiguration of Jesus.

He appears to have been a really amazing character. Yet in all of the ancient writings that have been passed down to us, no further information is given about Elijah. Some Bible scholars say Elijah was a Christ figure and that his story implies both the virgin birth, since he appeared out of nowhere, and the ascension, because he rode off into the clouds on a fiery vehicle.

If there really was an Elijah, and if there is any factual basis for the story, he was obviously superhuman in origin. He not only appeared strangely during a time of political and spiritual madness, but he lived like a hermit in the desert, sleeping in caves. He dared to speak with authority against the corruption of his age and stood up to the King of the tribe.

Anyone who could do that and get away with it would obviously leave his mark among the people who witnessed what he was up to.

That Elijah left the planet in a fiery chariot that lifted up with a whirlwind clearly gives us the image of a flying ship powered by an energy that was shooting fire from its aft engines, created a dust cloud, or left a vapor trail in its wake across the sky.

Whoever Elijah was, he left such an impact that he is somewhat worshipped by the Jewish people even to this day.
​
If Jesus hadn’t come along when he did, the great world religion of the West may have been given the name Elijanity instead of Christianity. The awkwardness in even trying to say that name may have been the reason it never happened.