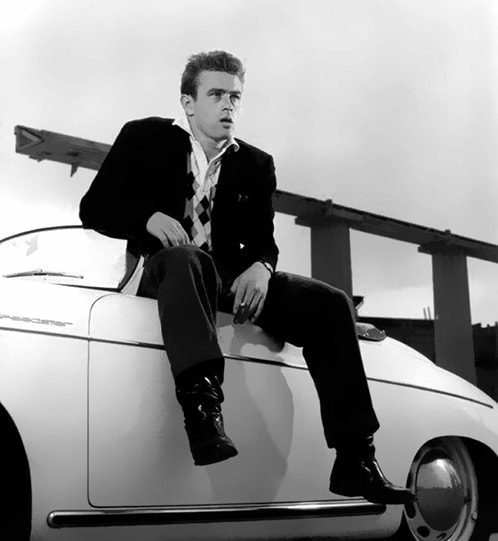 James Dean was a phenomenon in his day. He suddenly burst on the Hollywood screen in three starring roles in the early 1950s, then disappeared as quickly as he appeared, dying in a violent car crash only weeks before his final and most remembered film, Rebel Without Cause, was released.

Dean's stardom escalated almost overnight, much like that of singer Elvis Presley, in that same era. His unique acting style . . . of a sultry youth caught up in a rebellious culture . . . and the odd mystery surrounding his death, is believed by many historians to have thrust Dean into the realm of American legends.

They said Dean lived fast and hard, especially after he acquired money from his first successful films, East of Eden and Giant, and he had the means to buy the car that killed him, a rare Silver Porsche Spyder, one of only 90 ever produced, only days before his death. He nicknamed the car "The Little Bastard," and planned to race it in a planned race at the Salinas Airport in Monterey County.

As the story is told, the 24-year-old Dean was enthralled by the car, but his friends expressed a dark foreboding about the vehicle. It was said that actor Alec Guiness told Dean to get rid of the car or he would be dead within the week, which was exactly what happened. Another friend, George Barris, said the car seemed to give off "a weird feeling of impending doom." Dean's girlfriend, actress Ursula Andress, refused to even get in the car. and Nick Adams said the car made him "uncomfortable."

After Dean wrapped up shooting on the Warner Brothers set, he and his mechanic, Rolf Wutherich got in the car and headed south toward Salinas. Following in a Ford station wagon, with a trailer for carrying the Porsche were Bill Hickman, a fellow actor, and Stan Roth, a noted photographer. The original plan was to tow the race car to Salinas, but Dean changed his mind at the last minute and decided to drive the car and put some "pre-race mileage" on it. It was, of course, a fatal decision.

The caravan left Los Angeles at about 1:30 p.m. on Sept. 30, 1955, heading north on Route 99, now Interstate 5. Almost as if the Universe was issuing Dean a final warning, the two vehicles were pulled over by a California Highway patrolman that afternoon and both drivers were issued speeding tickets.

The caravan then turned west on Highway 466 (now 46) north of Bakersfield and headed for Paso Robles, where the travelers planned to check into a hotel for the night. As they began their ascent into the Diablo Range mountains, Dean's powerful Porsche left the slower station wagon behind as they climbed Polonio Pass.

The downgrade from the pass runs straight until it comes to a Y intersection of Highways 46 and 41. Police later estimated Dean's vehicle was traveling at about 85-miles-an-hour as it approached that intersection. Approaching from the opposite direction was a 1950 Ford coupe operated that day by Donald Turnupseed, a student at Cal Poly, who was going home to Tulare for the weekend. The two cars crashed head-on after Turnupseed failed to see the oncoming Porsche and attempted a left turn onto Highway 41.

Police later concluded that the color of Dean's grey car and the twilight dusk camouflaged the Porsche. The accident happened at about 6 p.m. Dean was pronounced dead at the Paso Robles War Memorial Hospital. Authorities said he died almost instantly of a broken neck.

Wutherich miraculously survived the crash, but was so badly injured he never completely recovered. He told authorities that just before impact, Dean commented on the approaching Ford and said he believed the driver "was bound to see them and that it had to stop" before making the turn. But the car did not stop.

Turnupseed suffered only minor injuries. He walked away from the wreck with a gash in his forehead and a bruised nose. He was never charged.

People who have studied the accident scene note, as the police did, that when you stand at the intersection at that time of the day, and at the time of the accident, the portion of the road that Dean was traveling on is completely blind to a vehicle attempting a left turn because of the position of the sun.

The Porsche Spyder was left a mangled wreck lying beside a utility pole on the side of the highway. One would have thought it should have been left at a local scrap yard and forgotten, but because of Dean's popularity, made even stronger by his untimely death, that piece of junk still had value.

A professional automobile customizer, George Barris, bought the wreck for $2,500, and this is where the story starts getting weird. It seems that while it was being towed to a garage where Barris could work on it, the wreck came loose from the tow line and fell on a mechanic's legs, fracturing both of them.

The car was so badly mangled that Barris decided to sell parts of it, perhaps as souvenirs. Although some people decided to use the parts they bought in their own race cars. Thus the story of the Dean curse began.

Barris sold the engine and drive train to two doctors; Dr. Troy McHenry and Dr. William Eschird. They used the parts in their own racing cars and entered the cars in a race at the Pomona Fairgrounds, Pomona, California. In that race, both cars crashed. Dr. Eschrid lost control of his car and was nearly killed when his vehicle flipped. Right after that, Dr. McHenry died when he also crashed.

Two of the tires from the Dean death car were sold to a man who was never identified. As the story is told, that man later complained that both tires blew out at the same exact moment, causing his vehicle to crash into a ditch.

There were two break-ins of Barris' garage, when people attempted to steal parts from the car. One young man attempted to get the steering wheel and had his arm ripped open on a piece of jagged metal. A second would-be thief was injured while trying to steal the front seat. 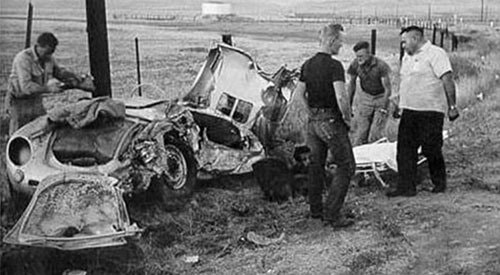 By this time, Barris was starting to believe there was some kind of curse on the Dean car. He stopped selling parts and let the California Highway Patrol use it as a safety exhibit. One night, while the wreck was stored in a garage with other vehicles, the building burned. All of the cars in that garage were destroyed in the fire except for the Porsche Spyder, which took only smoke damage.

Shortly after the fire, while the Spyder was on display at Sacramento High School, the car fell off its pedestal pinning a student. The student suffered a broken hip.

Even though it remained a mangled wreck, the Porsche was actually involved in another fatal vehicle accident while being trucked around the state for various exhibits. Trucker George Barhuis, while hauling the wreck to Salinas was killed after he was thrown free of the truck cab but was crushed to death when the Porsche fell on top of him.

One account said trucks carrying the cursed wreck were involved in at least two more accidents after that. In Oregon, the trailer that the car was mounted on slipped from its tow-bar and crashed into the front of a store. Nobody was hurt.

Then in 1959, while on display, the wreck collapsed into 11 pieces. Nobody could explain why that happened.

After that, Barris decided to retire the wreck for good. At the conclusion of its final exhibit in Miami, Florida, the parts were boxed up and loaded on a truck bound for California, but they never arrived. One story said the boxes were shipped by rail in a box car. However the parts were shipped, they disappeared in transit.

To this day, it is said the Dean death car has never been found. As recently as 2005, Volo Auto Museum, Volo, Illinois, offered a million dollars to anyone who currently had the car. As far as we can determine, it never resurfaced.

The curse story goes even beyond the Porsche. All three lead actors from that final film, Rebel Without Cause, also experienced tragic deaths at a young age. Sal Mineo, was only 37 when he was stabbed to death in West Hollywood in 1975. Natalie Wood was just 43 when she drowned in a boating accident. And Nick Adams, who appeared in the movie and later went on to star in a popular television series, died at 36 from an overdose.