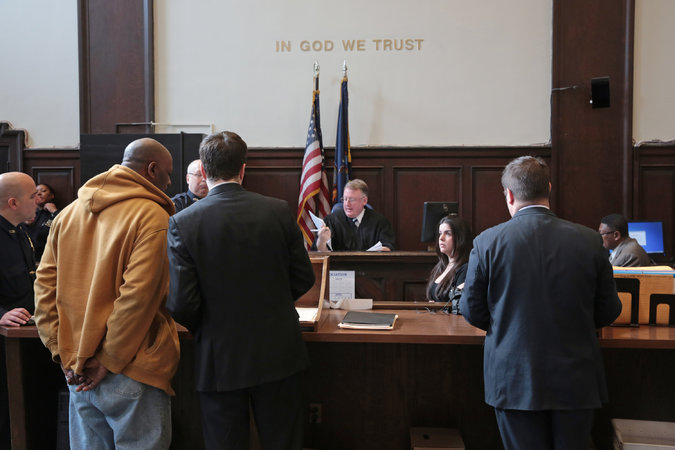 Does Plea Bargaining Belong In Our Justice System?

The practice of bargaining with alleged felons to persuade them to accept a "reduced" charge in exchange for a promise of a lighter punishment has been a major part of the court criminal proceedings for as long as I can remember.

The concept was originally designed to speed accused criminals through the judicial process, reduce the backlog of criminal trials and consequently reduce the cost of processing court criminal cases.

It seems like a good idea at first glance. But when you put yourself in the shoes of the defendants who stumble blindly into the frightening unfamiliar world of judicial canon, the practice of due process and the Sixth Amendment right to a fair and speedy trial quickly gets lost in the fog of legal jargon and clever manipulation amid the cluster of lawyers fluttering like vultures through the halls of every courthouse.

Those lawyers make their living feeding on the carrion of the cornered "wrongdoer" just captured by the police for some alleged offense. These people who are totally unfamiliar with the structure of the court system, many of whom have just spent a frightening night in a local jail cell, are herded like cattle before a judge. One-by-one they are called to stand before the bench, where the face of a robed power figure, flanked by uniformed police officers and other court workers, stares down at them from an elevated perch. Behind the bench usually stands both the state and national flags. It is all designed to be an imposing symbol of power and royalty.

So here is how the system works for those poor souls that become snagged for various offenses by the police.

The defendant is forced to stand before this imposing judicial figure while the legal charge against him is read aloud by a representative of the local prosecutor’s office. The judge first asks if the defendant is represented by a lawyer. Of course, he usually isn’t. The defendant is next asked if he or she can afford legal counsel or wishes to have the court appoint a lawyer to serve as counsel.

Here lies the trick. Most defendants will agree to accept an appointment of a lawyer. At that point, the judge calls on one of the lawyers that happens to be fluttering like vultures around the courtroom. The lawyer then whisks the defendant off to a small conference room, or sometimes just into a private place in the hall outside the courtroom to discuss the case.

Suppose it is a drunken driving case. This is a felony in most states and punishable up to possibly a year in jail and fines that could total up to $1,000. If this is a first offense, the lawyer will "plea bargain," or promise the defendant a reduced sentence if he accepts a lesser charge of impaired driving. When brought back before the judge, the arrangement is explained, the judge accepts a plea of guilty to the charge of impaired driving, but the sentence is usually just as stiff as it would have been if the accused had pleaded guilty to the original charge. The only difference is that the driving record does not show a drunken driving charge and the defendant may not lose his driving privileges.

Another unexpected shock is that in addition to the fine and court costs imposed on the defendant, the court charges also include the cost of those few moments the defendant spent with his court appointed lawyer. This bill alone can often run into hundreds of dollars.

Notice that no one ever asked, or gave the defendant the clear opportunity to plead innocent to the charge and to demand a court trial. The entire plea-bargain scam is carefully designed to steer the defendant into one direction . . . that is into pleading guilty to something so the court docket can be quickly cleared of his or her business.

Imagine now that someone appears before this court who has been wrongly accused of a major felony crime like rape, armed robbery or even murder. These cases involve a much more complex system of pushing the defendants through the courts. The accused is first brought before a lower district or municipal court judge for processing. Here he or she is offered a chance for a "preliminary examination," or mini-trial to determine if the prosecution has collected enough evidence to show that the defendant may be guilty of a crime. If the preliminary exam is waived, the defendant is quickly bound over into a higher Circuit Court for arraignment. At that point the assumption is that the defendant plans to plead guilty.

The same exact trickery is used in the lower court to try to force the defendant into a plea bargain situation right up front. Prosecutors and judges do not like trials because they take up time and expense. A single felony trial might tie up a court for a week or longer, force the call-up of a jury of 12 citizens, force a bank of lawyers, legal professionals, court recorders and a variety of police officers and other witnesses from their regular day jobs to testify.

Consequently the police and prosecutor usually work together to charge the defendant with a long list of serious crimes, thus building bargaining chips for plea bargaining the case and forcing the alleged felon to agree to a reduced charge rather than take a chance at being convicted by a jury of the more serious offense.

A 20-year prison term on a reduced charge of second degree murder might sound more appealing to a person charged with first degree murder which carries a life sentence. Even if the person is innocent, the temptation to accept the plea bargain would be strong.
Some criminologists believe American prisons are holding a lot of innocent men and women who were goaded into accepting a plea bargain rather than risk losing their chance of being found innocent in a court trial.

The other factor here is the high cost of obtaining justice in America. Even though the U. S. Supreme Court has ruled that all defendants accused of a crime must be afforded the right to legal representation when they go before a judge, the court did not rule that this legal representation must be offered without charge.

Anybody who has ever hired a lawyer knows that they don’t work cheap.
​
There is a common knowledge in the United States that real justice is allowed to only those who can afford to buy it.