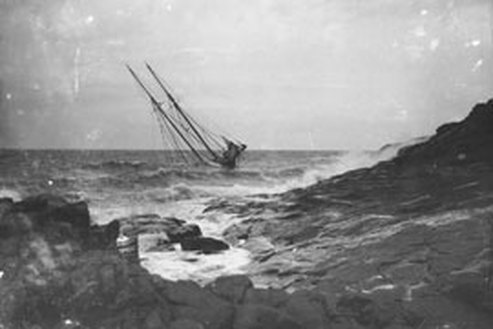 The schooner Agnes G. Donahue literally sailed the world for her Canadian owners. She was a small vessel at only 99 feet in length, but well constructed and designed for the unsavory duty her owners required of her. They were seal hunters.

In her search for prey it was said the Donahue made successful voyages around Cape Horn and the Cape of Good Hope, setting records as varied as any sailing ship ever to cruise the high seas. She chased the elusive seals as far away as Norway, South America and the Indian Ocean.

In the 1907-08 season the schooner made record catches and rescued the crew of another sealer, the Solglint of Norway. Then in 1905 she was seized by the Uruguay government and the crew jailed for violating hunting laws. They were later released.

As international seal hunting declined, the vessel was retired and sold to the Nova Scotia Clay Works and used as a barge. Her job was carrying bricks from the Annapolis Basin. She was still on that job on September 10, 1913, laden with bricks and bound for Saint John when she was caught in a heavy gale. The hull opened and the ship, foundered off Point Prim, Nova Scotia. The crew of seven men was rescued by the local life saving station.

The wreck was close enough to shore that photographers managed to capture pictures of what remained of the historical schooner. A former skipper, Captain Charles Leblanc, later saw the pictures and said they made him sad. "She deserved better than to go down with a load of bricks," he wrote in a letter.
​
Even though the Agnes G. Donahue sailed the waters of the world, she was destroyed not far from the place she was built, Lunenburg, Nova Scotia, Canada. She was launched in 1903.