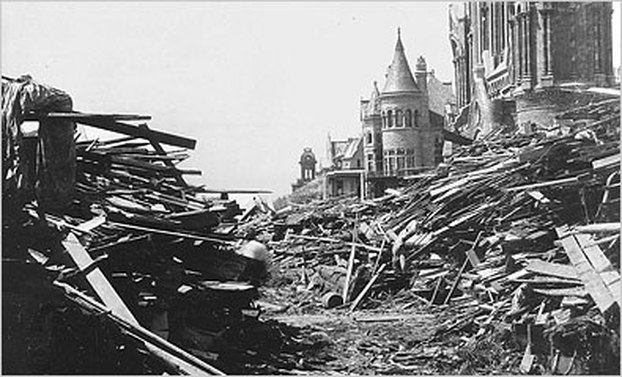 Every year during hurricane season, historians recall the great hurricane that leveled the City of Galveston on Sept. 8 and 9, 1900.

My grandparents, Peter Jerome (P.J.) and Lilly Grace Donahue, lived at that time on a farm not far inland from Galveston. The storm wrecked their house and barns, killed their livestock and almost killed my grandfather.

An estimated 6,000 people died in the storm which is still remembered as one of the worst disasters to strike the United States in the nation’s history. For a time it ranked high beside the San Francisco quake and the great Chicago fire. Contemporary events, however, are overtaking those terrible events of a time now long past.

My grandmother wrote a series of letters and recording the family history. The letters were recently passed around among family members via the Internet. A cousin made sure I received copies, for which I am grateful.

She wrote that the rain was so heavy that when the winds picked up, the water already was so deep that P.J. walked barefoot to the barns to close the doors and secure the buildings. She said the water was “standing shoe mouth deep” in many places.

“While in one of the sheds he stepped on a twisted wire. He pulled it out but it gave him much pain. Brother Frank who was with us went to town to get some turpentine but that gave little relief so Frank went back and brought the doctor out.”

She said the doctor was frightened of the storm, in a hurry to return home, and was careless in the way he treated the wound. She said he “took his pocketknife, wiped it on his pants leg and lanced P.J.’s foot. Frank took the doctor back to town and was not able to get back that night.”

By this time the storm was reaching its full fury. She said the house, which stood on blocks three feet off the ground, was blown off and came crashing to the ground. Some of the farm animals seeking shelter under the house were crushed. She said trees were being uprooted and one of them crashed into one side of the house, which still stood intact, smashing the windows on that side.

The said some neighbors saw the house fall and came to help. “They held to the wire fence and just advanced when the lightning made it bright. They reported that the barns were going. The men helped P.J. and the children to the dry side of the house.”

That was my grandmother’s situation in the midst of the great Galveston hurricane. She was huddled in that semi-wrecked house with four little children and a husband who was becoming delirious with fever from an infected foot. “I kept wet clothes on his foot. We had no light but I could reach out of the window and touch water. It was everywhere,” she wrote.

“Toward morning a man and his wife and child came from across the pasture. The storm was about over by then. Their house had gone. They stayed in the barn a while then it went. They kept out of the water by (standing) on the grave of their baby in the yard.”

At daybreak, she said some men came from town to report that they found Frank’s buggy upside down in the street in front of a store building that was blown down. They feared that Frank was under the wreck. But Frank later turned up alive and well. He said one of the two horses balked and refused to face the storm for the ride home so he let it loose and went to a secure building to take refuge from the storm.

Lilly Grace wrote: “The morning after the storm we found the barns and sheds all down. The work team (of horses) and one of the black mares were killed, the hay in the barn falling on them. The hogs were swimming around catching chickens out of the water. There were no pears on the trees, not even leaves. The men found some pears in the ditch under the water.”

A calf was found still alive under the house. She said the men cut a hole in the floor to free it, but it later died.

She wrote that one of the horses that Frank took to town with the buggy was killed. The other survived the storm but was so mentally disturbed by what had happened to it the animal just stood and stared off into space after that. It soon died.

Grandfather was so sick he was moved to the Galveston hospital where doctors had to cut his foot open and remove the rotten flesh to save his life. She said they had to cut so deep they cut through one of the tendons. He was on crutches for a long time after that.

Lilly Grace wrote that she took a train into Galveston to see him in the hospital so got to see all of the damage caused by the hurricane.

She wrote that the storm carried lumber from the destroyed buildings in Galveston for miles out into the prairie. She said the people of Arcadia, about twenty miles from Galveston, collected the lumber to rebuild their homes.

She said human bodies were lying everywhere. “They were too badly decayed to be identified so they just dug holes and buried them there.”

She said she saw dead cattle lying along the track when she rode the train into Galveston, which was about a month after the hurricane.

My grandparents both survived that storm, which was probably a good thing because my father was one of the last of eight children in that family. He came along a few years after that event. Lilly Grace wrote only of four children in the house at the time of the storm.