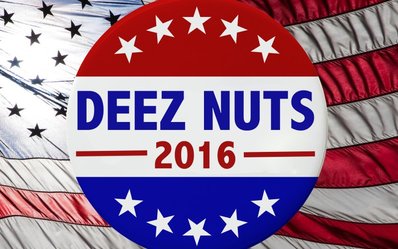 The state primary victories this week putting Donald Trump and Hillary Clinton at the head of the pack in party races for presidential nominations is about to put to a test an old story about voter choices that favor double letters.

Some years back I met a man who liked to study numbers and statistics. He pointed out that there is an unusual phenomenon among winners in American presidential elections. It seems that candidates with double letters . . . Roosevelt, Hoover, Kennedy, “Bill” Clinton and “Jimmy” Carter . . . always win office because voters appear to like these names.

If you study presidential election history, you will find that the formula works even when candidates only have two of the same letters somewhere in the name. These include Dwight D. Eisenhower (two D’s and three E’s), Richard Nixon (two N’s) and George W. Bush (two G’s).

The irony here is that if Al Gore had chosen to be known by his full name, which is Albert Gore, he probably would have scooped enough extra votes in the 2000 elections to have defeated George W. Bush hands-down. There are two E’s in both names but the final count was decided by the Supreme Court after the final count ended in an alleged tie electoral vote. Gore won the popular vote.

Whether caused by a subconscious preference by American voters to choose names with double letters, or some other reason, there is a strange pattern here that needs to be considered by candidates before they spend the billions of dollars it takes to jump into a presidential campaign. It also suggests that the fate of the nation may not depend upon voter common sense.

It helps explain why Barack Obama become the nation’s first black president. With a name like his, he was a sure winner.

And while this writer personally favors Democrat Bernie Sanders for the presidential nomination, the three "E's" and two "N's" in his name may not be as powerful as the three "L's" in Hillary Clinton's name, since two of the letters are next to each other. If the formula holds true again this year, and the election is conducted fairly, either candidate should beat Mr. Trump in the November election.

If the media would give Green Party contender Jill Stein a fair audience, the double "l's" in her name would make her a strong candidate. And if Elizabeth Warren would magically get drafted as a Democratic candidate, or agree to put her name up as a vice-presidential candidate, her name with three "E's," two "R's," and two "A's" would make her a sho-in for that high office.

We cannot put these odd statistics aside, but if we could, we would strongly urge American voters to think carefully this year before casting their votes. The choice they make this time around will be the most important one they may ever make.