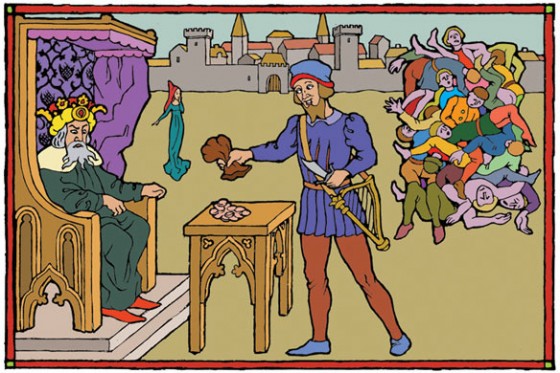 A Basket Of Foreskins For The King

How incredible it is that Christians and Jews hold sacred so many stories of extreme barbarism found in the pages of the Old Testament. The stories appear to be a record of the history of the Hebrew people who claim to be following the Will of God in their violent actions involving warfare, murder and sexual assault.
This week we explore the strained relationship between young David and Saul, reportedly the first king of the Israelites.

While even the Jewish historians now question whether Saul ever existed, the ancient Hebrew story was that he was appointed to lead the people by the Prophet Samuel. During his violent reign Saul fathered a family of four sons and at least two daughters. They were Merob, the oldest, and Michol, the youngest.

According to the story, David, a commoner, was known for his ability to play the harp. And he gained a reputation among the people after he faced and killed the giant Goliath. Thus it was that Saul, who was so unpredictable in his actions that some thought he was possessed, invited David to become part of his court as both a soldier and musician.

There were two attempts by Saul to get his daughters married off and his first target was David. He first offered his oldest daughter, Merob to be David’s wife. David rejected the offer. He said it was because he did not feel worthy of being the son-in-law to a king, but it may have been that he was not attracted to Merob. The scriptures never indicate that David found either of Saul’s daughters to be "fair," or that he was sexually attracted to them.

This decision angered Saul and he began plotting against David. When word got out in the kingdom that the younger daughter, Michol, was secretly in love with David, Saul tried again.

In 1 Samuel 18-25-27 we read: Then Saul said, ‘Thus shall you say to David, ‘The king desires no bride-price except a hundred foreskins of the Philistines, that he may be avenged of the king’s enemies.’ Now Saul thought to make David fall by the hand of the Philistines. And when his servants told David these words, it pleased David well to be the kind’s son-in-law. Before the time had expired, David arose and went, along with his men, and killed 200 of the Philistines. And David brought their foreskins, which were given in full number to the king, that he might become the king’s son-in-law. And Saul gave him his daughter Michal for a wife."

That had to have been the strangest dowry ever given by a suitor for the hand of a new bride. Just envisioning the stench and the sight of 200 cut off male foreskins brought before the feet of a king. It gives us a sense of the life of barbarism the people of that early time in history lived through.

King Saul and three of his sons died in battle with the Philistines at Mount Gilboa in 1007 BC and David, the son-in-law, quickly moved up the chain to become the next king of the Israelites.
​
Thus it was that the fate of the very future of Israel rested on that smelly basket of 200 foreskins collected by David on the battlefield.