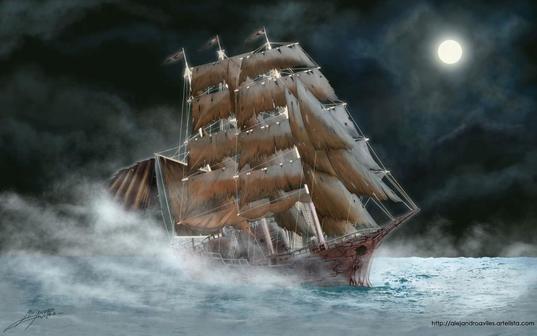 Among the haunted ghost ships of the world sails the el Caleuche, a mythological Sixteenth Century tall ship observed by the Mapuche people who claim this strange vessel is seen nightly off the Island of Chiloe, for which the apparition bears its name.

The people of this island, just off the coast of Chile, South America, were said to have successfully repelled the invasion of the Spanish conquistadors when they landed in South America. The warfare and stories that sprang from that historic event include the visions of the ghostly Caleuche, which is allegedly seen seen to this day. Or so the Mapuche people say.

Historians who visit the island say that the people have managed to maintain a collected pre-Columbian wisdom and heritage known as the Chilota mythology. And they tell stories of the mighty tall-ship Caleuche.

The ghost ship appears as a beautiful, three-mast, square-rigged ship full of lights. When it appears the people say they hear the sounds of laughter and partying by the souls on its decks. The sightings always happen in the night and once seen, the ship only remains visible for a short time before disappearing into the darkness. Some think it submerges itself under the water. But this is the legend.

No one seems to know the origin of the Caleuche story. Over the years the natives appear to have embellished the story. Some say they believe the ship is some kind of “conscious being” carrying the spirits of drowned sailors in a kind of “paradise” type of existence in an unending voyage. Also with them are kidnapped fishermen who are forced to serve as the ship’s crew.
​
Sailing with them are the water spirits Sirena, her sister Pincoya and their brother Picoy. These spirits are like mermaids with long flowing blond hair and golden scales. Picoy has the body of a sea lion with golden fur and the face of a man.