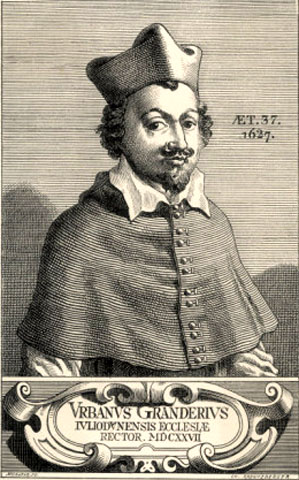 He denied it right up to the moment he died while tied to a fiery stake, but much has been written about the Catholic Priest, Father Urbain Granadier and his alleged pack with the devil, and his story has become legend.

Fr. Grandier was born in Bouere, France, in 1590. He served as priest of the church of Sainte Croix in Loudun, but apparently rejected all of the church rules calling for celibacy among the priests. He developed a reputation as a philanderer, having sex with a number of women about town. He even wrote a book in which he attacked the discipline of clerical celibacy.

It did not take long before Fr. Granadier found himself in serious trouble. Strangely the trouble did not come from the diocese or even the Vatican. Rather it came from the nuns of the local convent who accused him of bewitching them and sending demons to commit “evil and impudent acts” with them.

Author Aldous Huxley and other people who have studied Granadier’s case note that the man’s troubles with the nuns began after Grandier declined an invitation to serve as the convent’s spiritual director. This angered the Mother Superior, Sister Jeanne of the Angels, who they said “became obsessed” with Granadier having heard of his sexual exploits. Having been rejected by Fr. Grandier, Sister Jeanne became his mortal enemy.

She accused Grandier of using black magic to seduce her. Eventually the other nuns in the rectory made similar claims. Church leaders soon had Grandier arrested. He was interrogated and tried by an ecclesiastical tribunal, but then acquitted.

The accusations of the nuns was one thing. But Granadier apparently had a hard time staying out of trouble. After writing scathing criticisms and making a public verbal attack against Cardinal Richelieu, the chief minister of France, Grandier found himself arrested and recharged with the same allegations levied by the nuns. Only this time it was Richelieu who was bringing the case against Grandier.

Even though the nuns refused to get involved with this new case, the judicial clerics sitting judgment on Granadier this time produced documents allegedly signed by Grandier and several demons which they said was evidence that he made a “diabolical pact” with the devil himself. This panel found him guilty of practicing witchcraft and sentenced him to death.

One of the documents used to convict Grandier still exists today. Interestingly enough, it contains what they said was Grandier’s signature plus the signatures and seals of Lucifer, Beelzebub, Leviathan, Elimi and Astaroth, all demonic entities said to have been involved in the priest’s demise.

The four judges not only ordered Grandier burned alive at a stake, but first he was subjected to a severe torture involving an iron vise filled with red hot spikes that was drawn on his feet so that his bones were crushed. After this he was tied to a stake and burned alive. Throughout the entire ordeal, Grandier never confessed to the charges brought against him.
​
Grandier died a terrible death in Loudun, France in 1634 because he dared to write, act and speak out against the church authority of his day. Such was the compassion expressed within the clergy of the Roman Catholic Church of France in the Seventh Century.