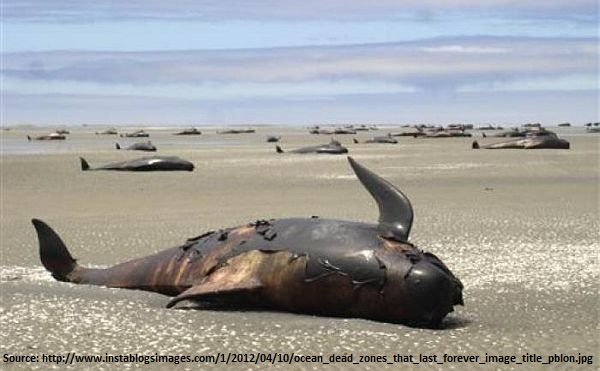 The alarms have been posted now for years. Instead of changing the things we are doing that are killing our oceans, humans have only intensified their harmful activities. We are fishing the waters too heavily; we are polluting the water with plastics, oil and methane spills, and we are dumping toxic chemicals in our streams that are flowing into the seas and creating massive dead zones.

To top it all off, the Fukushima disaster has led to heavy spills of radioactive water that is making much of the great Pacific Ocean toxic. And the Deepwater Horizon fire and oil spill, and the volumes of chemicals used by BP to attempt to resolve the problem have made much of the Gulf of Mexico and large portions of the Atlantic Ocean toxic. Consequently, fish caught in the open oceans of the world are becoming too toxic for human consumption.

The warming planet is causing the ice caps to melt. This in turn is releasing volumes of hidden methane gas that is working its way to the surface.

The heating of the planet is being absorbed by the oceans. This in turn is causing extreme weather changes that are destroying property and crops. As the oceans warm they are losing oxygen. There already are large “dead zones” appearing in the oceans and a recent study by the National Center for Atmospheric Research has found that climate change-driven oxygen loss is being detected on large swaths of ocean. Oceanographers warn that this problem is growing and will have a “significant impact on marine ecosystems within only a few years.

This means that even without all of the other man-made problems, the heating world will make our oceans uninhabitable for most sea creatures within perhaps the next 15 to 20 years.

Oceanographer Matthew Long, who was involved in the study, explained that the warmer surface water does not absorb oxygen well so the warming of the oceans is a direct cause of the deoxygenation of the oceans. This in turn will eventually cause a literal suffocation of sea life.
​
He warned that the concern among researchers is that “we’re conceivably pushing past tipping points” in being able to stop this disaster from occurring.
​
The solution Long says, is for the world to stop burning fossil fuels. We need to do this now.