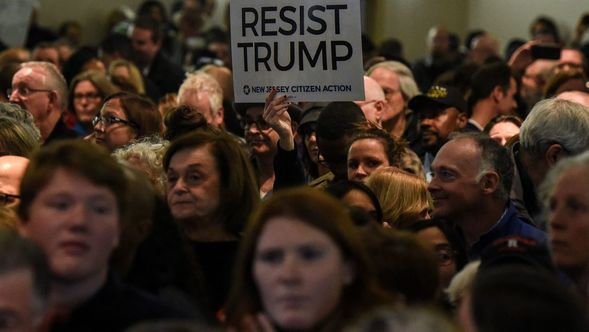 Are the Republican controlled courts and legislators about to create a dictatorship with the help of the goon that now rules the nation with the appearance of an unhinged supremacy?

Indeed the 212 protesters arrested by the Metropolitan Police while demonstrating against the inauguration of President Donald Trump in January are about to become a test case against a frightening legal crackdown on the nation’s First Amendment right to free speech. All are charged with felony rioting, urging to riot, conspiracy to riot and destruction of property. It is a list of felony charges that could carry sentences of 70 to 80 years in prison if they are found guilty.

According to Al Jazeera, one of the few newspapers still offering balanced reporting of political events occurring in the United States, what is happening in Washington is part of a frightening crackdown on free speech that is occurring all across the country.

A companion report that appeared in AlterNet, prepared by Celisa Calacal and Lauren Kaori Gurley, noted that 18 states have responded to a rash of political protests by proposing bills designed to suppress public demonstrations. The laws tend to make it illegal to participate in public demonstrations and threaten extreme penalties for those caught doing it. Florida, Tennessee, Georgia and Iowa have introduced bills that level harsh penalties for blocking traffic and demonstrating on private property.

Thankfully the American Civil Liberties Union is involved. The agency is declaring all these new laws unconstitutional and vowing to fight every case brought against protesters by state-created laws that violate the First Amendment.

Many of the Washington protesters took plea bargains and pleaded guilty to charges to shorten their sentences. But about 130 of the defendants have joined a pact pledging to reject any potential plea deals. Lawyers for 21 defendants have already filed motions to have their cases dismissed. Others have filed a class action lawsuit against the Metropolitan Police alleging that the officers engaged in excessive use of force and conducted false arrests. The Office of Police Complaints in the District of Columbia has called for an independent investigation to determine the facts.

What appears to be shaping up here is a battle between the people and big corporate powers that seek to seize control of our nation by stripping the Constitution and putting a puppet leadership like Trump on the throne. It has become clear that all of Mr. Trump’s campaign promises and the money spent to slip him into office, was no more than a ruse. Now that the controlling forces behind the curtain have the power, they intend to keep it by destroying the democratic system of government that we have long enjoyed.

Notice too how outspoken television personalities are suddenly being fired or their jobs severely threatened for saying "objectionable" things on the television screen. Speaking out against Trump and his policies is now becoming a dangerous thing to do.

This attack on First Amendment rights appears to be only the first round of a campaign by the Trump Administration to destroy the Constitution. He has declared that the document is no longer needed. And if Mr. Trump can stay in power long enough to replace two or three elderly Supreme Court members, it may be possible that the high court will support the general destruction of our government as we have long known it.

This legal battle over the public’s right to protest may be an important first stage of a looming citizen’s revolution against the capitalistic system that has had this nation under its thumb for too long.