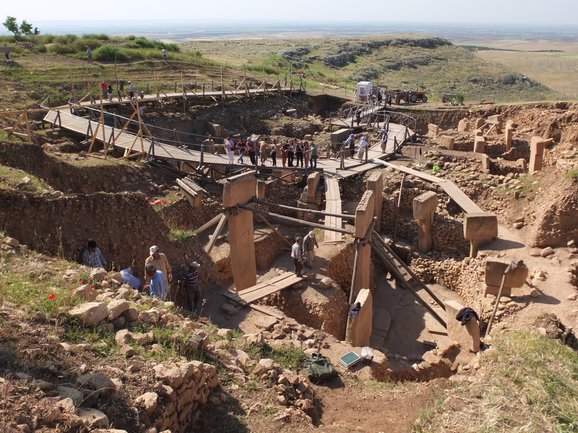 Massive carved stone pillars and rings, some up to 65 feet across, and believed to predate Stonehenge by at least 6,000 years, are being slowly uncovered by Klaus Schmidt, a German archaeologist and his team since discovered in 1994 in southeastern Turkey near a place called Urfa.
The megalith, called Gobekli Tepe, is estimated to be about 11,000 years old and may be the world’s oldest known temple. What boggles the minds of archaeologists working at the site is that the massive stones were carved and obviously moved by a prehistoric people who, according to historians, had not yet developed metal tools or learned to make pottery.

The site is located at the very northern edge of the area known as the Fertile Crescent, where the first great civilizations were believed to have emerged. This area, also called the Cradle of civilization, includes southeastern Turkey, Lebanon, Iran, Iraq, Syria, Kuwait, Israel, Palestine, Jordan and northeastern Egypt. The first great civilization that we know of to emerge in this area was Mesopotamia, which was a unification of various city-states in about 2,800 BC, or about 5,000 years ago.

This is what makes Gobekli Tebe such a spectacular discovery. At the time people were carving figures of birds, animals and insects on these massive stones, humans were believed to still be living in a hunter-gatherer period, even before the idea of agriculture and community living was conceived.

A detailed report by Tom Knox for the UK’s Daily Mail states that “most of these standing stones are inscribed with  bizarre and delicate images – mainly of boars and ducks, of hunting and game. Sinuous serpents are another common motif.” Other stones show carved images of crayfish, lions, and odd human forms with “stylized arms which angle down the sides.”

Knox noted that at the time of his writing 45 of the stones had been exposed, with what appears to be hundreds more to be revealed as the researchers work the site. They are arranged in circles that measure from five to ten yards wide.

The very existence of carved, shaped and positioned megalith rings of this size seems to show that the old theories of human origin and evolution have been wrong. Humans obviously did not emerge from caves and they had some kind of tools in hand long before the Mesopotamian Empire existed. Also they shared a desire to create massive monuments, including artistic carvings in the stone.

Gobekli Tebe is massive. Schmidt says he has mapped the large summit on which he is excavating with ground-penetrating radar and geomagnetic surveys, and found at least 16 other megalith rings within a 22-acre area. His own one-acre excavation, which has been going on for at least a decade, covers less than five percent of what he believes will be found there. He says archaeologists could dig here for another 50 years and hardly scratch the surface.

From the size of the site, and the massive weight of the stones that not only were cut and carved, but carried to be placed as part of the monument, a very large number of people were involved in creating it. Yet there are no signs of human habitation near the site. The best that can be found are thousands of bones of wild animals and birds indicating that they were hunted, cut apart and cooked at the site to feed the workers.

From his findings, Schmidt is theorizing the almost unthinkable. He is suggesting that people came from miles away to work on the megalith, but never thought of, or chose to, or dared to build a city nearby in which to live.

That the first signs of farming are not found in the earth until after 11,000 years ago, Schmidt also is suggesting that the building of monuments preceded agriculture during human evolution. He notes that all of the bones found at the site are of wild beasts that had to be hunted. There were no bones of domesticated animals like sheep, chickens and cows.

Yet the need to gather so many workers to carry out a task of that magnitude must have caused some of the brighter thinkers of that early crowd to start imagining better and more efficient ways to feed, house and provide for the needs of masses of people. Farming would have been an obvious first step.

Indeed, at a prehistoric village only 20 miles from Gobekli Tepe, researchers have found evidence of the world’s oldest domesticated strains of wheat. Radiocarbon dating suggests that agriculture developed there about 10,500 years ago, only about 500 years after Gobekli Tepe was erected.

The purpose of such a monument also boggles researchers. Other carvings on the pillars include wild and menacing creatures that included lions, spiders, snakes and scorpions. Stanford University archaeologist Ian Hodder suggests that the complex was some kind of spiritual protection for the people, especially since it was located a good distance away from where they lived.

Knox said some researchers are daring to perceive Gobekli Tepe as the original “Eden” as described in the Book of Genesis. They are saying that it is now the oldest site of human habitation in the world. “It is so old that it predates settled human life.”

That so many workers were needed to accomplish such a massive structural undertaking means that methods had to be created to feed and house them. This called for extensive hunting, gathering and preparing of meals, and very likely the invention of farming once all of the wild game in the area ran out.

“I think they began cultivating the wild grasses on the hills,” Knox wrote. And if they gathered for religious reasons at the site, it was the religion they practiced that motivated the development of farming just to feed the numbers of souls that gathered regularly at this amazing place.

Not only were the early forms of domestic wheat found near the site, the world’s first farmyard pigs were domesticated at Cayonu, only 60 miles away. Also it is found that sheep, cattle and goats were first domesticated in eastern Turkey.

Knox draws the parallel with the Biblical Eden as follows:

“As we began farming we changed the landscape and the climate. When the trees were chopped down, the soil leached away. All that ploughing and reaping left the land eroded and bare. What was once an agreeable oasis became a land of stress, toil and diminishing returns. As so paradise was lost. Adam the hunter was forced out of his glorious Eden ‘to till the earth from whence he was taken’ as the Bible puts it.”

Knox notes that the Book of Genesis is filled with little hints that connect Gobekli Tepe with Eden.

--The Biblical Eden is located west of Assyria, and this is exactly where Gobekli is located.

--In Genesis the Biblical Eden is located near four rivers, including the Tigris and Euphrates. Gobekli lies between both of these great rivers.

--Another Old Testament writing speaks of “the children of Eden which were in Thelasar.” There was indeed a town in northern Syria by that name which was not far from Gobekli.

--The word Eden is a Sumerian word that means “plain.” Gobekli is located on the plains of Harran.

“When you put it all together, the evidence is persuasive,” Knox writes. “Gobekli Tepe is, indeed, a 'temple in Eden', built by our leisured and fortunate ancestors - people who had time to cultivate art, architecture and complex ritual, before the traumas of agriculture ruined their lifestyle, and devastated their paradise.
​
“It's a stunning and seductive idea. Yet it has a sinister epilogue. Because the loss of paradise seems to have had a strange and darkening effect on the human mind,” he wrote.