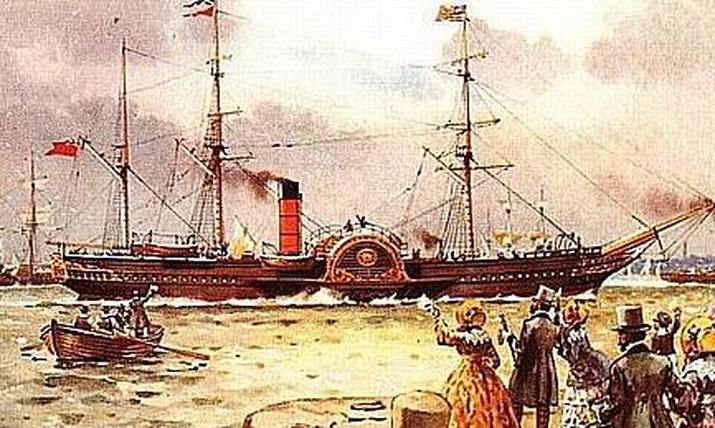 The founding of the British and North American Royal Mail Steam Packet Company to carry mail between England and North America in 1839 signaled the beginning of what was to be the great Cunard Line of steamships.

The genius behind the business was Samuel Cunard, of Halifax, Nova Scotia. He summoned marine engineer Robert Napier to design four steamships for his new line, and secured the financial backing from prominent businessmen James Donaldson, George Burns and David MacIver.

The first steamship, launched in 1840, was the Britannia. It was soon followed by the Acadia, Caledonia and the Columbia.

The Britannia, a wooden hulled 207-foot-long ship driven by side mounted paddle wheels, thus became among the first early steamships to carry passengers and mail across the Atlantic on a regular basis. It had the capacity for 115 first class passengers and made regular trips between Liverpool and Halifax, Boston and Quebec. In addition to making regular stops at port cities, the steamer traveled up the St. Lawrence River to reach Quebec.

The steamer could travel at a top speed of nine knots. It made its first trip across the Atlantic in 14 days, eight hours, which was considered very good time in 1840.

“They were two-decked ships, the upper deck having the officer’s cabins, galley, bakery and cow house, while on the main deck were two dining saloons, the accommodation for one hundred and fifteen cabin passengers and all the other necessary fittings for a passenger ship.

“Only cabin passengers were carried, the emigrants of that day having no alternative to the sailing ships. In addition the Britannia and her sisters carried two hundred and twenty-five tons of cargo, all at special rates,” Bowen wrote.

All four steamers were unique because they were identical to each other. Cunard also succeeded in offering regular, on-time service for both passengers and the mail, which made the vessels very popular in their day.

One interesting observation by Bowen was that the Britannia was fitted with multiple wheels in the wheelhouse, located to starboard, aft. That was because steam powered steering was not yet invented, so the ship was turned by hand steering alone. During bad weather it required six or even more seamen at the wheels to keep the vessel under control.

The Brittania remained on the seas until 1880 when it was purposefully sunk by the Prussian Navy as a target ship. It served that navy, and prior to that the German Confederation Navy under the name Barbarossa, after Cunard retired the vessel for larger and faster steamships in 1849.

During its years as a Cunard liner, the Britannia experienced two mishaps of special attention. In February, 1844, it became trapped in ice in Boston Harbor. The people of Boston cut a seven-mile-long escape channel, at their own expense, so the steamer could escape.

The Britannia also stranded on the rocks at Cape Race in September, 1847, but the crew miraculously worked the steamer free by lightening its cargo. It then make a successful trip into New York harbor, its hull leaking and the pumps barely keeping the ship afloat. There it was repaired and put back in service in 1848.

A correspondent for the New York Commercial Advertiser later described the way the Britannia was saved from the rocks that day.

“As soon as it was ascertained that the steamer was ashore, orders were given to clew up the sails, the guns were run aft, and the provisions and everything else that could be removed were shifted, the water in two of the boilers was let off, and the passengers all crowded to the stern; the engines were reversed, and two waves or rollers coming in, we were, under the gracious protection of an over-ruling Providence, once more afloat.”

The damage from the crash proved more severe than anyone first thought. The writer said: “The keel was carried away from abaft the wheel to the extreme end, taking with it the forefoot and a great quantity of the heavy sheathing. Part of the stem or cutwater also was taken off.”