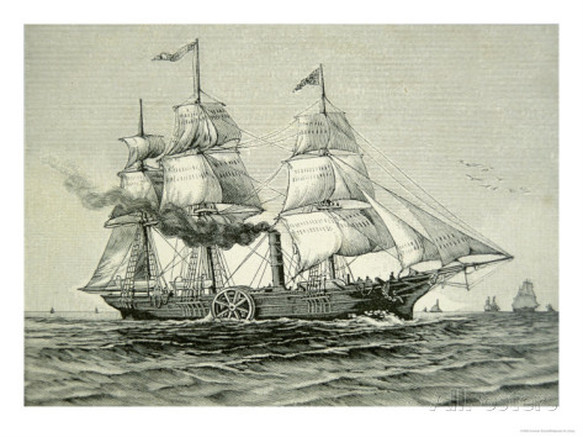 It should be said that a Savannah visionary named Captain Moses Rogers was born 20 to 30 years too soon. After inventor Robert Fulton successfully demonstrated the power of steam propulsion on the first American steamship Clermont on the Hudson River in 1807, Rogers launched a drive to build a steamship capable of crossing the Atlantic Ocean from Savannah to Europe.

With the financial backing of Savannah businessmen, Rogers formed the Savannah Steamship Co., hired an iron maker to design and manufacture a steam engine, built the ship complete with paddle wheels, and in 1919, just 12 years after the Clermont made that historic journey, he set sail under both steam and wind power for Liverpool.

The ship not only made a successful trip across the Atlantic, but it went on to St. Petersburg, Russia, then returned to Savannah, thus going down in history as the first steamship to cross the Atlantic and return. Purists say that the Savannah may have been a steamship, but it also was a full rigged sailing ship. And since it only used its engine for 88 hours at sea, or about 14 percent of the time it took to make the trip it was not a true voyage by a steamship across the Atlantic.

Yet the concept of using steam on a ship at sea was there. And it created much excitement, especially in Europe after the Savannah arrived. Newspaper reporters crawled all over the ship. Captain Rogers was invited to visit royalty and heads of state not only in England, but France and Russia. The King of Sweden offered to buy the ship for $100,000, payable in hemp and iron. But Rogers turned down the offer.

Had he known the future, Rogers might have been wise to accept the king’s offer, however. The Savannah never proved to be a profitable venture and everyone that invested in the steamship lost heavily. The principle investor, William Scarborough, was financially ruined.

It wasn’t until 1836, 17 years later, that the Great Western, a British built steamship, made the trip under full steam and became the first steamship to cross without using sail.
The Savannah, like all of the first steamships, was built as a sailing ship. She was launched in New York’s East River in 1818. She was no larger than a moderate yacht by today’s standards, with a hull measuring just 98.5 feet. Her hull was lean, like clipper ships of that day, measuring only 26 feet in width.

The Savannah Steamship Company, with Scarborough at its helm, purchased the Savannah for this particular conversion. She was sailed south to Savannah where the ship was fitted with iron steam engines and two 380 ton wheels made of wrought iron. Because the ship was going to operate under sail much of the trip, the wheels were designed to detach from the axles and fold up like fans to the decks while the sails were set.

The three-mast ship had capacity for only 75 tons of coal and 25 cords of wood, which was not enough fuel to drive it completely across the Atlantic. Thus it was clear that the owners had no intention of doing this. The advantage of the engine was that the ship could continue moving even during a calm when other sailing ships were standing dead in the water awaiting wind.

With its fuel gone, the Savannah made the trip back to America under sail. The vessel arrived home stirring great interest among newspapers and artists, but in the end it was a financial disaster for its owners.

Rogers tried to sell the steamship to Washington but the government was not interested. In the end the Savannah Steamship Company sold the ship stripped of its machinery and it served its new owners for a brief time as a sailing ship. Only two years after that she ran aground off Long Island and broke up, thus meeting a tragic end.