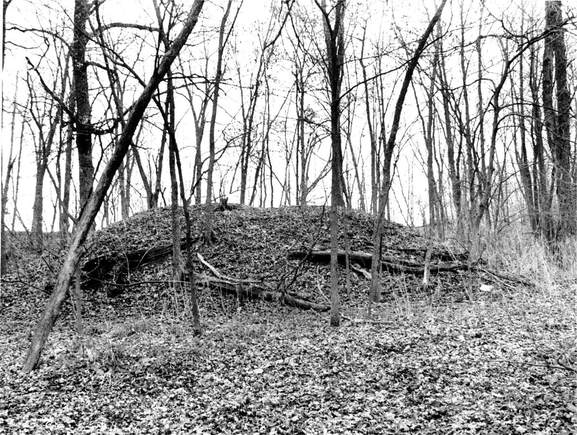 Obscure Michigan Mound
Were Ancient Mound Builders Hiding From Something?

Ever since the Europeans settled across the North American continent, it has been assumed that the thousands of strange earthen mounds found throughout the Midwest and along the Mississippi River were made for burials.

That is because archaeological digs have uncovered human bones in many of the mounds. Also found were crude stone and clay tools, pots and bowls.

The mystery has been that only some of the mounds contained human remains. Other mounds, especially the larger ones, were found to be empty. Thus the theory was raised that they were built for some ritualistic purposes. Some anthropologists have even theorized that temples once stood on the tops of them.

Having been raised in Michigan, where hundreds of mounds and other odd earthworks including acres of the so-called artistic shaped “garden beds” once flourished, I have often written about these mystery works and interviewed historians to glean their various theories about the builders and why they were made.

When working as a news reporter in Southwestern Michigan, I was given the privilege to accompany one self-proclaimed archaeologist on a hike through the forests of Berrien County where I was shown several mounds that still existed. They stood 12 to 15 feet in height, and up to 30 feet in width. A similar mound was still preserved in a city park in downtown Kalamazoo, across the street from the Kalamazoo Gazette where I also worked for a while.

All of these earthworks had been explored and found empty.

One of my favorite books in the library at South Haven was a 1925 atlas prepared by the late W. B. Hinsdale who spent much of his life collecting and preserving the sites and descriptions of mounds and other earthworks all over Michigan. He said at that time, about 600 mounds were still in existence, and he believed at least 500 more were already destroyed by human encroachment.

Few, if any, remain intact today.

Larger earthworks, of course, still can be found along the Ohio and Mississippi River basins. Among the best known of these is the famous Serpent Mound in Ohio.

It is said that the Native Americans that lived in the area when the first white settlers arrived had no historical memory of the mounds.

Because of the intricate patterns found in the so-called garden beds, and the amount of work required to make the mounds, some theorize that they were made by an earlier and more advanced civilization that occupied North America before the Indian cultures arrived on the scene. Who they were and what happened to them has remained a mystery.

According to Hinsdale, skeletal remains were found in various positions in some of the mounds. Also found were arrow and spear heads, stone tools, pottery vessels, sometimes iron, copper and brass kettles and glass beads.

As observed, the mounds are but shapeless piles of earth. Many have trees growing from them, a sign that they have been in place for a very long time. That the Native Americans who lived here when the white settlers first arrived had no memory of their origin supports the concept of antiquity.

The problem that always nagged at me when I studied or wrote of these mounds was why were bodies found in some, but not all of them? Were grave robbers responsible? Why would robbers want to dig up bones when there was nothing else of great value buried there except perhaps some pottery and tools?

That the bodies are found with dishes, pottery and tools means the people who hid inside these mounds planned to stay a while and brought food and water. That they also had tools, spears and arrows meant the threat was not expected to last a long time and the hiders planned to emerge from their cover and pick up living where they left it.

What could have happened so long ago that would have caused so many people all over the continent to build large earthen enclosures to hide in? Whatever it was, the people had enough forewarning to give them time to build these large earthworks.

A solar flare would not have given enough of a warning. Nor would a volcanic eruption. And there are no volcanoes threatening the Midwestern area of the United States.

It had to be something clearly visible to the people, probably in the night sky, that was projecting itself closer and closer to the Earth. We propose a large body, perhaps one of the planets was out of its orbit and moving on a near-collision course with Earth.

A controversial book, Worlds in Collision by Immanuel Velikovsky, published in 1950, projected a theory, based upon Velikovsky’s personal studies of planetary alignments and Biblical and other ancient records of odd catastrophic events, that suggested Venus once whisked through the Solar System, nearly colliding with the Earth before taking up its current orbit.

Whatever happened, legends passed down to us through Egyptian parchment, Chinese epics and stories passed down by the North American Indians, Maya, Aztec and Peruvian people, told of rivers turning red, fire blazing across the sky, pestilence in the land, global earthquakes, extreme winds and even falling stones that decimated cities.

Was Velikovsky right? Would these events be enough to kill people huddled under small mounds of earth throughout the woodlands of North America? We will study his incredible research in a later report.