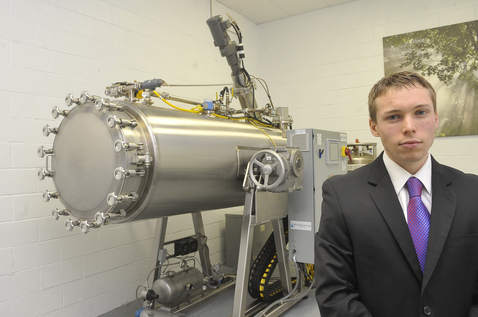 There is a process called alkaline hydrolysis that has been used for the past 16 years to dispose of animal carcasses. Because of the high cost of funerals and because we are running out of places to bury all of our dead, the process is being seriously considered as an alternative to conventional ways of disposing of human bodies.

If it sounds gross, that is because we are programmed to do the socially acceptable thing . . . that is put the embalmed body in a casket, spend at least three days gathering around it to mourn, and then recite final words as we watch the casket being slowly lowered into a hole in the ground.

Either that, or we place the body in a funeral pyre and burn it, either on a floating barge or in a crematorium. Burning has only recently become popular in America because it is far less costly than paying the full price of buying caskets and going through the ritual.

Alkaline hydrolysis is not a pretty route, and folks would not want to be standing around to watch it. But it offers the advantage of a quick and inexpensive way of disposing of human bodies without leaving much trace behind. It involves dissolving bodies in lye and using 300-degree heat and 60 pounds of pressure per square inch within big stainless-steel cylinders that are much like pressure cookers.

When it is over, the residue is a brownish syrupy substance that can be flushed down the drain. The process also leaves a dry bone residue that looks like cremated remains that can be returned to the family in an urn or buried in a cemetery.

Proponents of the process say the brown liquid is sterile and can be safely poured down the drain if the operation has the necessary permits, and we suppose, the drain feeds into a city sanitation system. The process eases concerns about crematorium emissions that include carbon dioxide as well as mercury from silver dental fillings.

Overall, the process is more environmentally friendly than burning bodies, and taking up space for big cemetery plots.

While there is an expressed interest in alkaline hydrolysis by U.S. Morticians, no funeral homes in the country, or anywhere else in the world, are known to yet offer this process for disposing of human bodies.
​
Because of its environmental advantages, however, we believe it is an idea worth considering. That old Christian belief that says our bodies will be popping up out of the grave when Jesus returns has created a mindset that has been highly profitable to funeral homes. Even the alternative of cremation is considered the equivalent to burning in hell for most die-hard believers.