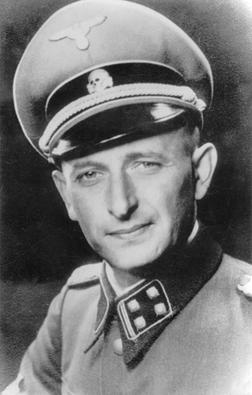 His full name was Otto Adolf Eichmann. His name has gone down in history as one of the major organizers of the German extermination camps in German-occupied Eastern Europe during World War II. The mass killings of Jewish, Polish, Romanians and others that went on in those camps have been estimated at over six million people.

Eichmann, who held the rank of lieutenant colonel in the Nazi SS, was given the job of facilitating and managing the logistics of the mass deportation of the Jews to those camps.

He joined the Austrian Nazi Party in 1932 and soon became a member of the SS. While serving as a corporal at the Dachau concentration camp he was assigned to the Jewish section, where he collected information on prominent Jews. He developed an obsession with Jews and went out of his way to do his research. He studied everything he could about the Jewish culture, even attending their meetings, studying Hebrew and became familiar with Zionism. He became so acknowledged that he was considered the Nazi’s “Jewish specialist.”

His interest in the Jews attracted the attention of Nazi leadership. He was eventually assigned to investigate a possible “solution to the Jewish question.” After the Nazis took over Austria in 1938 Eichmann was sent to Vienna to establish a Central Office for Jewish Emigration. There he issued permits to Jews wanting to leave the country. He granted safe passage in exchange for wealth. It was said nearly a hundred thousand Austrian Jews got out of Austria after turning all of their worldly possessions over to Eichmann’s office.

In 1939 Eichmann was appointed head of the new Reich Main Security Office where he was made responsible for establishing a Nazi policy for dealing with all of the Jews in Germany and occupied territories. He thus was one of the most powerful men in the Nazi military. He remained in that position for the rest of the war.

After Poland fell Eichmann and Reinhard Heydrich ordered the Jews to be rounded up and forced into ghettos and labor camps. There so many people were confined in overcrowded and unsanitary conditions they began dying from disease and starvation.

When Hitler order the physical extermination of the Jews the SS Einsatz under Eichmann’s supervision turned their full attention to the mass killings. Competitions developed among four Einsatz groups to determine which one killed the largest numbers.
Large numbers of the victims were driven into special locations and then gunned down and buried. After this the Nazis began getting creative in the ways they killed. They used mobile gas vans to kill with carbon monoxide.

Early in 1942 Eichmann and Heydrich organized the Wannasee Conference in Berlin where the extermination of the total Jewish population, an estimated 11 million people, was planned. By August of 1944 Eichmann reported the killing of an estimated four million Jews in the death camps and another two million by mobile units. Even as the Allies were closing in on Berlin and after Himmler order Eichmann to cease deportations, he managed to round up and lead another 50,000 Hungarian Jews on an eight-day death march to Austria.

When the German army surrendered in May, 1945, Eichmann was among the arrested officers who were confined in an American internment camp. But he managed to escape and flee to Argentina. There he lived under the assumed name Ricardo Klement for the next 10 years.
​
Mossad agents ruthlessly tracked Eichmann down, however, and abducted him in May, 1960. After a highly publicized trial in Israel, Eichmann was found guilty of war crimes. He was hung in 1962.