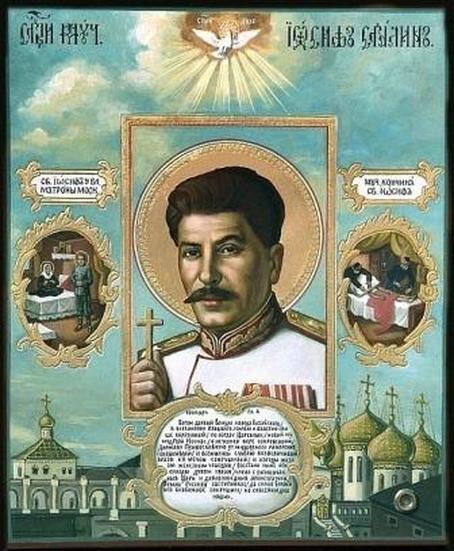 Stalin Was A Jesuit Priest

While digging through historical records to determine the feasibility of the legend that Hitler escaped to Argentina after the war, we came upon an interesting link between Joseph Stalin and the Roman Catholic Church.

It seems that Stalin was not only a Catholic, but he was an ordained Jesuit priest before he became a ruthless Communist dictator and mass killer of an untold thousands. Some believe Stalin was responsible for more death and destruction than Hitler yet the Catholic Church never chose to excommunicate him.

Stalin’s real name was Josef Vissarionovich Dzhugashvili. For obvious reasons, after becoming politically active, he changed his last name to Stalin, which, in Russian, means “made of steel."

He was born to relatively wealthy Catholic parents and attended a church-run school at Gori. He graduated at the top of his class in 1892. He then was accepted as a student at the “Orthodox” Seminary of Tbilisi, Georgia, where he trained as a Jesuit priest.

The history books report that Christianity was banned in Russia under the Communists, but this was not the case with the Jesuits. They not only remained in Russian territory but reportedly helped finance the first and second world wars. But that is another story.

Stalin talked about his conversion to Marxism during an interview with Journalist Emil Ludwig. He said the “Jesuitical methods prevalent” at the seminary were severe and he became “a revolutionary, a believer in Marxism” in protest to “the outrageous regime” he endured at the school.

He said the Jesuits were “systematic and persevering in working to achieve sordid ends. But their principal method is spying, prying, worming their way into people’s souls and outraging their feelings. What good can there be in that?”

In spite of his feeling about the Jesuits, Stalin remained a star pupil at the seminary and was ordained as a proper Jesuit priest after seven years of study. After his graduation, however, he became “influential and active in coordinating the Georgian Social-Democratic movement in the Georgian underground against the Russian Tsar. He was a secret leader of the Mayday uprising of 1901 and quickly moved up in rank among the revolutionaries.

In the years of turmoil that followed, Stalin was arrested and imprisoned in Siberia numerous times, but each time was mysteriously released and returned to action with the Bolsheviks. In 1917 Stalin and Lenin founded Pravda, the official Bolshevik newspaper in Saint Petersburg, which became a major tool of the revolution.

Lenin and Stalin did not get along even though they were both active in the revolution. Lenin regarded Stalin as a double agent of the Jesuits because of Stalin’s amazing “luck” at escaping execution and prison. Then in 1922, after the Bolsheviks won the Civil War, the Rothschilds and American Jesuit Bankers offered to finance the new Soviet Union if Stalin was given a key role. Thus Stalin was made General Secretary of the Central Committee, a springboard to his eventual position as head of the Soviets.

Stalin’s promotion set up a final show-down with Lenin. Lenin began planning to have Stalin “eliminated.” At the same time, Jesuit Superior General Wlodimir Ledochowski gave an order to Stalin to have Lenin killed. Lenin died of poisoning on January 21, 1924. The official word from Pravda was that Lenin died of syphilis.

Thus Stalin moved into the position of the undisputed ruler of the Soviet Union. Among his first acts was to outlaw the Russian Orthodox Church. Thousands of churches and schools were seized and handed over to the Catholic Church.

It is not very well known but Stalin, like Hitler, launched a deportation of Jews to Siberian death camps, where it is said tens of millions perished. The head of those camps was Catholic Jesuit Cardinal Gregory Agagianian, a former classmate with Stalin at Tiflis.

Another strange part of this story is that even though he was a fully ordained priest, Stalin was allowed to marry twice. And there is no record that he was ever defrocked as a priest.

And it should be noted that Hitler also was a practicing Roman Catholic. There seemed to be a strange involvement between both of these evil dictators and the Vatican.
​
There is much more to be told about this eerie story.