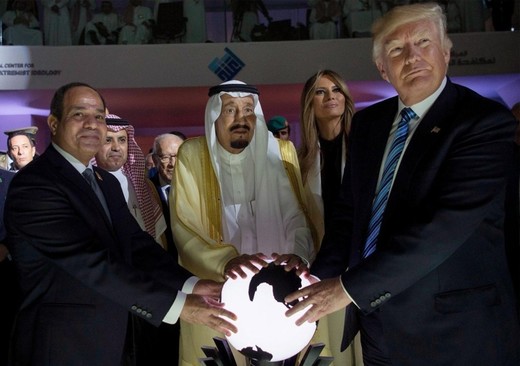 Guns, the Jesuits and the Blood Diamond King

President Donald Trump’s visit this week to Israel, the Vatican and Saudi Arabia is probably linked more to his personal business interests than the U.S. relationship with Saudi warlords and Israel’s Zionist controlled leadership. His visit with the Jesuit Pope may have even more ominous implications.

According to a revealing Dutch TV network Zembla documentary series, Mr. Trump and his son-in-law Jared Kushner are in partnership with Lev Leviev, a trader in African blood diamonds. He is considered the richest man in Israel.

And a revealing report by AlterNet writer Max Blumenthal noted that Trump is making the largest weapons deal in history, turning over advanced missile defense systems and heavy weapons to the Saudi’s in exchange for a promise of a $200 billion investment in U.S. infrastructure. But Blumenthal writes that Trump is asking that the infrastructure work be limited to the election “swing states” of Ohio, Michigan and Wisconsin to help assure him a second term in the 2020 Presidential elections.

The Zembia documentary examines the Leviev business empire that involves trading in blood diamonds from war-torn Africa to jewelry stores all over the world, including New York, London, Moscow and Amsterdam. Leviev, who owns the Netherland’s largest jewelry chain, Siebel, also has close ties with Trump and Kushner, plus Russian President Vladimir Putin, according to Zembla.

The documentary’s lead reporter, Sander Rietveld, said the revelation of Trump’s ties to Leviev, Kushner and Putin raises questions about Trump’s business investments that can only be answered by examining his tax returns. And Trump is stubbornly refusing to release those records.

Trump’s visit with the Pope will probably involve some closed door talks that will surely be linked to world finance and military power. The Vatican appears to be under the control of a Jesuit shadow government that researchers William Garner and Seam Maclaren claim has been operating throughout the world for hundreds of years. If they are right, it was by Jesuit permission that Mr. Trump was awarded the presidential post over the most powerful military force in the world.

The Blumenthal report notes that in making the weapons deal with the Saudis, Trump is reversing a stance taken by the Obama Administration. The problem has been that the Saudis are involved in what Blumenthal called a “death dance” for control of the Middle East “that grooves to the drums of war.” By releasing the powerful weapons on Trump’s list he is giving the Saudi’s a possible upper hand in seizing control over the other nations, including Iran, and setting the stage for a war that could quickly spread throughout the world.

Instead of trading for peace, Trump’s deal with the Saudi leadership will be designed to just give him the upper hand in winning a second term in his run for re-election. His speech in Riyadh this week will “likely have less to do with tolerance than with interests that converge around hostility to Iran, the drive to destroy a government in Yemen that is seen as its proxy, and selling tens of billions in weapons the meat grinder operation requires,” Blumenthal wrote.

“As in the past, American foreign policy in the Middle East has sacrificed national security and human rights for the dubious pursuit of empire. The leading edge of its cynical project is Saudi Arabia, the Arab Spring's destroyer, one of the world’s leading exporters of extremism and the top importer of American arms.”

Garner’s book, “Who Really Owns Your Gold,” and Maclaren’s sequel, “The Black Pope and the Jesuit Militia Distort, the History of the United States of America,” describe what they believe has been a Jesuit controlled shadow government that has controlled kingdoms, dictatorships, democracies and religions throughout the European world and the Americas for centuries.

They describe the Jesuit control as “a powerful and most secret dictatorship” that controls the media, our banking system, and big business . . . In reality citizens of all nations, including the United States, live in a slave state of dutiful taxpayers and obedient workers, just as they did as surfs under the great kingdoms of the Middle Ages.”

That Mr. Trump includes the Vatican among his first foreign visits after achieving the presidency should not be a surprise. Like other presidents before him, he must pay homage to the powers that put him in office and get his orders for the months to come.