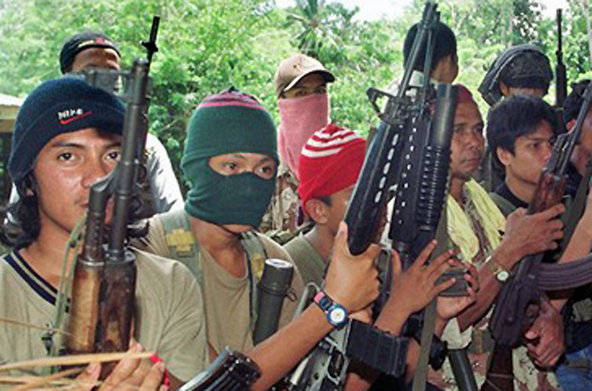 Abu Sayyaf; Terrorism In The Philippines

A militant Islamist group known as Abu Sayyaf has been carrying out bombings, kidnappings, assassinations and extortion since its inception in 1991 in what its members claim is a fight for an independent Islamic province in the Philippines.

The group, like so many other radical Islamic terrorist organizations springing up in the world, has roots in the Middle East wars. Its founders, brothers Abdurajik Abubakar Janjalani and Khadaffy Janjalani, appear to have been linked to the Moro National Liberation Front (MNLF), a Muslim rebel group operating in the southern Philippines in the early 1970.

Abdurajik was a teacher from Basilan, Philappines, who studied Islamic theology and Arabic in Libya, Syria and Saudi Arabia in the 1980s. When the Soviets invaded Afghanistan, Abdurajik joined the rebels fighting Soviet forces. It is said that while there he met Osama bin Laden, whose brother-in-law, Mohammed Jamal Khalifa invested $6 million to help Abdurajik establish a stronger MNLF force in the Philippines.

While Abdurajik and his brother may have recruited MNLF fighters, they organized a completely separate and intense fighting group in 1991 that took on the name Abu Sayyaf. In Arabic the name means “father of swordsmith,” thus leaving no question about its militant position in the area. Abu Sayyaf established its base in and around Jolo and Basilan, in the southern Philippines.

Ramzi Yousef, a high ranking member of al-Qaeda, was known to have been operating in the Philippines at about that time and was training Abu Sayyaf soldiers.

The organization began its operations in 1995, starting with attacks on the town of Ipil. In an engagement with the Philippine National Police in December, 1998, Abdurajik Janjalani was killed in a gun battle. After the brother, Khadaffy Janjalani succeeded Abdurajik the organization began getting even more violent, adding kidnappings, murders and robberies to its crimes.

The taking of hostages became a major source of finance for Abu Sayyaf under Khadaffy’s leadership. To acquire more lucrative hostages the group expanded its operations into Malaysia where it began abducting foreign vacationers from resorts. During this time the group was believed responsible for the kidnapping and killing of over 30 travelers and Christian clerics.

It was reported that Abu Sayyaf coordinated with a Chinese terrorist gang, the 14K Triad, in carrying out the kidnappings.

In 2006, Janjalani and two other members of Abu Sayyaf were placed on the FBI’s Most Wanted Terrorist list. He was killed later that same year during a gunfight with government troops in Sulu. The current leaders are named as Radullan Sahiron and Ishilon Totoni Hapilon.

In recent years Abu Sayyaf has been involved in the kidnapping of numerous journalists, television crews and even Red Cross workers who have entered the area to either learn about the organization, report on its operations, or assist local residents following attacks.

Nothing was apparently sacred to this gang of terrorists. They even managed to raid and kidnap several Malaysian fish farm workers and blow up a large ferry, killing 116 people after it had just sailed from Manila.

In spite of extreme attacks against Abu Sayyaf by the Philippine military, the organization continues to operate at a deadly guerilla force. In 2014 Abu Sayyaf leaders pledged allegiance to the new Islamic State of Iraq and the Levant, thus breaking ties to al-Qaeda.