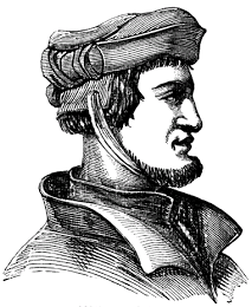 He was labeled a heretic by the church and some might have said he was in league with the devil, but German Mystic Heririch Cornelius Agrippa von Nettesheim left an indelible mark on the renaissance esoterica of his day. In fact three of his books on the occult are still circulating today.

While Agrippa wrote on many topics his most important work was a three-volume defense of “hidden philosophy” or magic. The work De Occulta Philosophiae examines everything from alchemy and astrology to Kabbalah. Yet another important work, De Incertitudine et Vanitate Scientiarum (Of the Uncertainty and Vanity of the Sciences) attacks the scientific theories and practices of the time.

Agrippa studied law and medicine. He was considered a magician, occult writer, theologian, astrologer and alchemist. He played a leadership role in feminist rights, something literally unheard of in his day.

He dabbled in a broad range of positions. He worked as a soldier, a secret agent, alchemist, occultist, physician and professor of law. He once set up a laboratory and tried to synthesize gold without success. In 1524 Agrippa served as personal physician to the queen mother at the court of King Francis I in Lyons. Later when practicing medicine in Antwerp he was banned for practicing without a license. Later he became a historiographer for the court of Charles V.

Agrippa’s enemies were always nearby. Consequently he spent several periods in prison for various alleged criminal offenses. The church was attempting to have him sentenced to death for heresy just prior to his death.

As to be expected the great thinkers during those renaissance years were not only controversial but their opinions conflicted with the teachings of the church. Agrippa’s writings and lectures on theology did not escape the attention of the church. After he defended a woman accused of witchcraft in 1520 he was attacked as a charlatan and driven out of Cologne by the Inquisition.

Agrippa also argued against the persecution of witches and was publically banned because of his interest in and the belief that he practiced magical and occult arts.

After his death in 1535 the legends about Agrippa began circulating. The stories said he was not only an alchemist but a vampire and magician driven by demonic forces. It was said that Agrippa’s dog jumped into the Rhone River as he lay dying in Grenoble. This caused many to believe the dog was possessed by a demon.