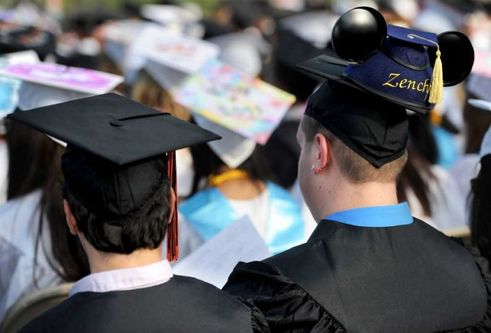 The phrase "Mickey Mouse" used in reference to certain college level course studies hasn't gone away. We said it when I attended college half a century ago and I noticed in a recent news story that students are still saying it.

The problem is that there appear to be more courses falling into that "Mickey Mouse" category now than ever.

That this study was conducted in the UK is troublesome. We believe a similar study of students attending American universities might reveal even more startling information. We suggest that students in the United States are not even aware that they are being duped at great expense into corporate slavery by big business.

During my years in college, the Mickey Mouse courses included stuff like Reserve Officers Training, conducted by the U.S. Army, a mandatory series of freshman and sophomore classes for all males during the days of the draft and the Vietnam War. Other imposed classes on the university curriculum included four hours of physical education, and a lot of the freshman year basics that seemed to get in the way of higher studies. We joked that the ultimate Mickey Mouse class was Underwater Basket Weaving 101. Of course that course didn't exist then. It might today.

My point is that liberal arts studies was being phased out of University curriculums even in my time because the universities and high schools were receiving money from big corporations and shifting emphasis on training students for specific careers. The idea of expanding the mind through reading and discussing classic literature, and testing theories of physics, mathematics and chemistry, was slipping away.

More recently we are seeing a general "dumbing down" of American students. The advent of computerized cash registers that calculate prices via markings on the package, and that make automatic change was not done for efficiency. Most store clerks under the age of 30 today are unable to properly count change when they are forced to do it. We have had numerous incidents where we have received either too much, or too little change when younger people are involved in these kinds of transactions.

We believe this was all done by design. We believe big corporations and our political leadership wants a dumb and illiterate population so that it can be more easily controlled, forced into servitude involving long working hours for low reward, and manipulated to vote the way the power structure wants it to vote.

If you research the source of revenue for most American colleges and universities today, you will find they get government support, but also some large donations from big corporations. The rest of the money is picked up by students through student loans, which can get so big during those four critical years of college that the student devotes most of his or her income into paying them off following graduation.

And it has been the big corporations that have been creating the tunnel reality we have all shared for so long. Many people believe, even today, that they are living the American dream because they may have a comfortable home, if only an apartment or duplex now, and a late model car in the driveway. But they probably don't own either the car or the home, they are in debt up to their eyeballs, they may not have adequate health insurance so hold off going to the doctor when they get sick, and they are often holding down two jobs just to make ends meet.

While the masses are struggling, we notice that America has a growing list of very wealthy millionaires and billionaires. Something is truly out of whack and it badly needs to be fixed.