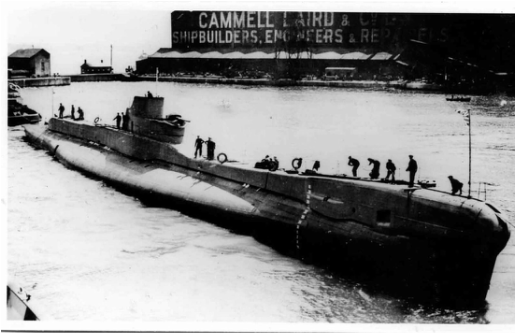 Ninety-nine sailors, technical engineers and naval officials died on the newly launched submarine Thetis because of a deadly series of blunders during the ship’s sea trials in Liverpool Bay. The incident remains the Royal Navy’s worst ever submarine disaster to this day.

The 270-foot submarine was launched in June, 1938 and was still going through sea trials when the disaster happened on June 1, just one year later. During a trial run in April, the fore-planes jammed at hard dive and the submarine was returned to dry dock for additional work.

During May, torpedo equipment trials were conducted, and the tubes were given a coat of bitumen paint. Unnoticed was that a worker accidentally or mistakenly blocked a test-cock hole with paint. This played a key role in the disaster that followed.

When Thetis left Birkenhead for her test dive on that fateful day, she was carrying not only a normal crew of 53 sailors, but had an extra 50 people on board. Some were observers and others were engineers from Cammell Laird, the company that built the vessel. There also were two caterers and a special pilot. She was led out to sea by the tug Grebecock, which was to stand by as an escort for the day.

When Thetis reached its diving position, she signaled the dive and that she would be down for three hours. The tug, commanded by a Lieutenant Coltart, a former submariner, took up station a half mile away. After the sub went under, Coltart carelessly allowed the tug to drift away from the dive area, which was another unfortunate circumstance.

Before the ship made the dive, the Laird workers were offered the opportunity to leave the vessel, but all chose to stay. Once the dive was started, Thetis remained too light and would not submerge as expected.

Submarine commander, Lieutenant Frederick Woods, was struggling with this problem. He wanted to flood the torpedo tubes to add extra weight but because of the paint over the test taps, there was uncertainty as to whether No’s 5 or 6 tubes were flooded. At this point Woods made a fatal decision to open the inner doors. He had no way of knowing that one of the outer torpedo doors was already open and that the bow-cap of No. 5 tube was open to the sea. The first and second compartments immediately flooded before the water doors could be closed, and Thetis suddenly dropped by the nose 160 feet into the sea. With hundreds of tons of water in the forward compartments, the ship threatened to sink to the bottom.

Inside the stricken submarine, valiant attempts were made by some of the men to get into the tube space and close the bow cap, but they couldn’t do it. An S.O.S. was sent, and the men, all of them cramped inside the submarine, could only wait for surface craft to arrive and hope for a miracle. Because the Thetis was still somewhat buoyant, the crew did everything possible to get the stern as near to the surface as possible. Sixty tons of drinking water and fuel oil were dumped, allowing Thetis to rise stern first out of the water for a few brief minutes.

During that short time, sailors began slipping through an escape hatch at that end of the vessel. Only four men made it out before the ship settled back into deep water again. They were Captain Oram, Lieutenant Woods, Leading Stocker Walter Arnold and a Laird engine fitter named Shaw. It is interesting to note that the ranking officers were the first to flee. Four other men slipped through the hatch after the sub began to dive again, and they didn’t make it.

Communications were not as good in those days as they are now. It took over three and a half hours for a telegram informing Naval officials of the disaster to reach the Navy’s Submarine Headquarters in Portsmouth. Operation Subsmash was then put into action, with Captain I. A. Mcintyre in charge. But his efforts to save the men in the submarine went sour.

Because the tug had drifted out of position, and the best rescue vessel was hundreds of miles away, the exact location of Thetis was not known. Aircraft flew overhead, located the submarine, but called inaccurate locations. Also important cutting equipment was not ordered until it was too late. Basically, everybody botched the job as time ran out for the men crammed into that ill-fated submarine where carbon dioxide levels were rising fast.

A salvage ship arrived on the scene in time to attach a wire hawser around the stern of the sub and then with the help of winches, an effort was made to pull it back to the surface. But the strain on the wire cable was too great, the hawser snapped, and Thetis sank to the bottom.

On Saturday, June 3, the Admiralty announced that all hope of further survivors would be abandoned. The bodies of those 99 sailors who suffocated remained inside Thetis for about four months until mammoth salvage operation beached the wreck at Traeth Bychan. After the bodies were removed, the vessel was towed to Holyhead. Forty-four of those lost men were interned in a mass grave in the town were a memorial was dedicated.

The Thetis went through an extensive rebuild and was re-commissioned as HMS Thunderbolt. She returned to sea in December, 1940 in time to participate in World War II. She was depth-charged and sunk by an Italian warship off Sicily on March 14, 1943, with the loss of all hands.
​
As a result of that disaster, a device known as the Thetis Clip is fitted to all rear torpedo tube doors to prevent such a mistake from ever happening again.
​ 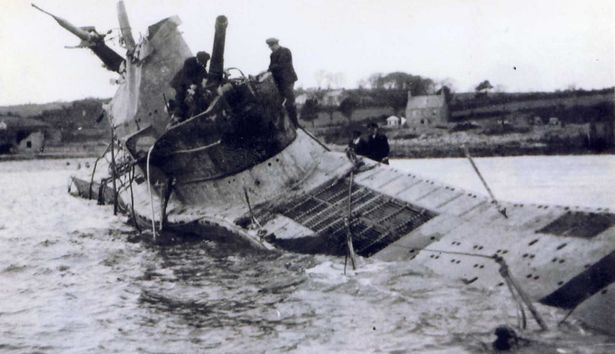