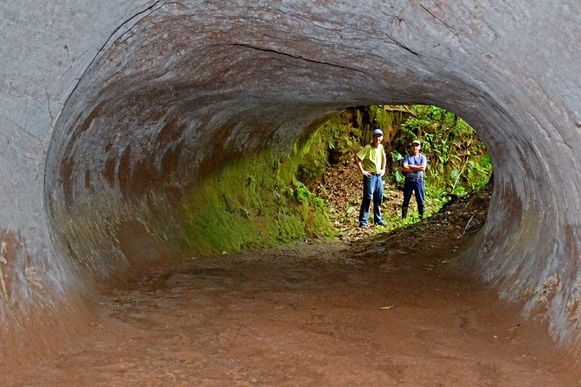 It was Erich von Daniken’s controversial book The Gold of the Gods that generated my personal interest in the possibility that a secret network of underground tunnels exists in large parts of South America.

While I no longer possess The Gold of the Gods in my personal library, I clearly remember von Daniken’s description of an exploratory trip through miles of mysterious clean-cut passageways, using only a flashlight to find his way. He said he and Juan Moricz, the man who allegedly discovered the entrance, explored miles of a subterranean labyrinth under the province of Morona-Santiago, Ecuador. They saw great rooms filled with metallic plaques with engraved images on them and suggested this was a great library of information from an ancient world.

Madame Helena Blavatsky, famed Nineteenth Century theosophist, writer and traveler, told of having knowledge of the entrance to a network of secret tunnels under the Andes Mountains that led to a cache of hidden gold.

Of the tunnels Blavatsky wrote: “There is no other access to the Arica chamber but through the door in the mountain near Pay’quina. Along the entire length of the corridor, from Bolivia to Lima and Cusco, are smaller hiding places filled with treasures of gold and precious stone, the accumulations of many generations of Incas, the aggregate value of which is incalculable.

“We have in our possession an accurate plan of the tunnel, the sepulcher, and the doors, given to us at the time by the old Peruvian. If we had ever thought of profiting by the secret, it would have required the cooperation of the Peruvian and Bolivian governments. . . The mere task of purifying the mephitic air of the tunnel, which had not been entered for centuries, would also be a serious one.”

Blavatsky wrote that the tunnels began at Cuzco and continued underground for about 380 miles to Lima, then turned southward into what is now Bolivia. Thus, if she was correct, the tunnel continued for about a thousand miles.

Warren Smith, in a report on Subterranean Tunnels of South America, wrote that Spanish Conquistador Francisco Pizarro Marquess, who raided the Incan Empire in the Sixteenth Century, found tunnel entrances sealed with giant slabs of stone on Huascaran, a sacred mountain of the Incas.

Smith said a group of South American spelunkers opened and explored the caverns in 1971. The tunnels lead toward the seacoast for sixty miles and then under the ocean bed. The exploration was blocked about 80 feet below sea level because the tunnel was flooded. The team said the floor of the tunnel was made from stone slabs that had been mortised and grooved to fit snuggly together.

John J. Robinson is one of many writers who have recorded a mystery tunnel behind the ruins of an ancient temple at the ancient village of Liyobaa, part of the Zapotec Civilization, in southern Mexico.

After the conquest of the area by the Spanish Conquistadores, the Roman Catholic priests moved in to try to convert the natives. They were appalled to find that the temple, in Mictlan, or the Village of the Underworld, was considered a place of the dead.

The Cavern of Death was entered from the last of eight chambers within the temple.

Robinson tells the strange story of a delegation of priests that decided to explore  this cavern in their determination to convince the natives that the place was a myth. They entered with torches and a long rope tied to the stone slab door to assure they could find their way back out again.

He wrote: “After they had lighted their torches and entered the door, it was discovered that they would have to descend several large steps. At the foot of the steps was a very wide stone-paved passageway with a high stone buttress on either side. The passageway led directly away from the steps into the distant bowels of the earth.
“The passage seemed to continue without end. On each side of the buttressed path they could see into a large area which was a large labyrinth of stone pillars that seemed to hold up the very mountains which they knew they were beneath. As they advanced into the mountain, a putrid, dark air assailed their nostrils, serpents retreated from the light behind the shadows of the pillars in the distance.

“They continued into the depths at a distance of about 40 meters when suddenly a strong cold wind began to blow about them. Still striving to continue, as their torches were extinguished rapidly, they took flight, when all became dark, not only for the danger of the serpents, but also from strange sounds they could not place, but which were not being made by members of their own party. Using the rope and the light of the torch one of the guards held in the doorway, out of the strong wind, the entire party rapidly retreated from this terrifying region.”

After this adventure, the priests declared the place an entrance to Hell, and fortified it with large boulders so no one could ever enter it again.

The existence of this mystery labyrinth of tunnels throughout South America remained conjecture until quite recently. The Aztecs of Mexico, the Mayans of the Yucatan, and the Incas of Peru and Chile all shared a belief in a dark underworld ruled by a god of death. Were these religious beliefs the result of their knowledge of strange underground passageways into darkness? If they existed, reasoning deducted that such underground burrowing was not the work of primitive civilizations. So who dug the tunnels?

Contemporary researchers who have not only found these massive tunnels but have begun to study them with the technology of modern times now suspect they were never dug by human hands. Claw marks found on walls and ceilings are showing evidence that they may have been the work of giant ground sloths that existed during the dinosaur period, and spent their entire lives digging tunnels and living underground.

If they are correct, the tunnels are much older than Von Daniken, Blavatsky or Smith ever dreamed. Their existence may date at least to 8,000 to 10,000 years ago, before the natives found and perhaps used them to hide their precious artifacts.

The sloth made “paleoburrows” suggested by geologist Amilcar Adamy of the Brazilian Geological Survey appear to offer an interesting and more logical concept explaining the origin of the amazing complex of tunnels that seem to lead into nowhere, but are found throughout large parts of South America.

The new idea is that the tunnels were carved out by humungous South American ground sloths from a now extinct Lestodon genus. Such creatures are calculated to be about 15 feet long and weighing up to 5,000 to 6,000 pounds.

Researcher Heinrich Frank of the Federal University of Rio Grande do Sul, Brazil, has recently found more tunnels under the Brazilian landscape. He reports that over 1,500 known “palaeoburrows” have been found in southern and southeastern Brazil, many of them extending for miles and occasionally branching off into separate chambers.

Thus the various books telling about the existence of mystery tunnels under South America have moved out of the realm of the unexplained and science fiction category. The tunnels do exist. And while they may have been used by the tribes that found them, they were apparently never the work of men.