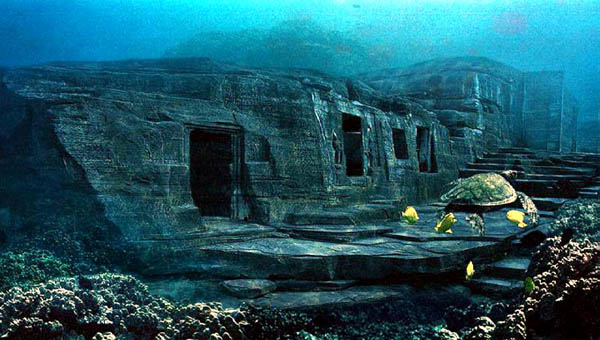 The legendary stories of Atlantis, Mu and Lemuria, great island civilizations that once existed before disappearing under the sea following great cataclysmic events, have been part of the mythology of the aboriginals all over the world.

While these specific places seem to be difficult to find and identify, modern sonar and space technology is finding something else . . . evidence of great stone structures that still stand . . . but at the bottom of the seas all over the world.

There also is evidence that intelligent civilizations have existed on this planet for a very long time . . . longer than contemporary history books and religious belief systems would have us believe. And from the growing number of remarkable discoveries deep under our oceans, this planet has gone through some major geological changes. They were so dynamic that they not only sent great cities plunging deep under water, but pushed them so high into mountainous terrain that people could no longer live there.

Lake Titicaca, a body of water in the South American Andes established as the highest existing lake in the world at some 9,000 feet, hides a submerged stone causeway leading out into the lake and other evidence that a port city once existed there. Also found in the mountains around the lake are ancient terraced maze fields in an area too high in elevation to support maze.

Among the more exciting deep sea discoveries has been the remains of what appears to have been a great city, complete with roads, bridges, buildings and even pyramids located about 2,100 feet under the Atlantic Ocean just off the coast of Cuba. First discovered in 2000 by a sonar team, the site was visited by a Canadian exploration company the following year that confirmed the cities existence. The city is so ancient some speculate that it may be older than the great pyramids of Giza, Egypt.

Yet another submerged "city" was found by a sport diver in 1995 in only about a 100 feet of water in the Pacific off the south shore of Okinawa. So far, five large stone structures have been found there, linked by paved streets and crossroads, huge altar-like formations, grand staircases leading to broad plazas and processional ways surmounted by towering pylons. The buildings are as large as 240 feet in length and they stand about 45 feet in height. At our last web search no entranceways or chambers have yet been reported.

Then there has been the discovery of the ruins of a third mythical city off the coast of Mamallapuram, India, lying about seven meters under the Indian Ocean. The people of Southern India share a myth about large areas of the country, including a once great city, that were inundated by the sea.

The ruins are severely eroded, but they include walls, steps and stone blocks that were clearly put there by man.

And finally, a team of archaeologists, geologists and engineers recently discovered a great land mass, now under the North Sea, that once joined Britain to Northern Europe. The features of the area include a river as wide as the Thames before it became submerged an estimated 8,000 to 10,000 years ago.

All of this is evidence of the great age of our planet, and the dynamic history it has shared with the humans who have inhabited it for a very long time.