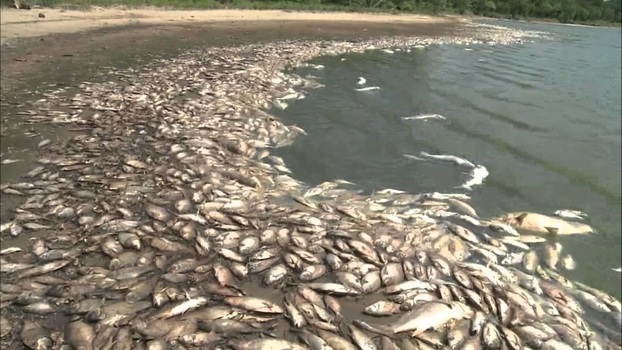 The Sprat concern about the mass fish kills was made incredibly evident to us all in January, 2011, when not only fish came floating up dead from their watery world, but birds were falling by the hundreds from the sky in various parts of the country.

The phenomenon has been observed more and more frequently all over the world. The bodies of dead fish and all other forms of sea life are still floating in lakes, rivers and coming ashore along the beaches.

Something very unusual appears to have happened in January, 2011 which caused the mass killings of thousands of birds and millions of fish all over the world at about the same time. Yet the so-called "specialists" that examined these separate events failed to draw any links, and most wrote it all off as a natural although unusual occurrence.

Wildlife specialists employed by government offices seem to always be assuring us that such things are "normal." When an estimated two million fish floated belly-up in Chesapeake Bay in January, 2011, the Maryland Department of Environment said the fish died of natural causes. The department issued a statement that said "cold water stress exacerbated by a large population of the affected species appears to be the cause."

Granted, the kill occurred during the heart of winter. But doesn’t winter occur every year on Chesapeake Bay? Does anybody remember seeing two million dead fish in the water during other winters?

Only a few days earlier tens of thousands of fish washed up along the Arkansas River near Little Rock. The kill stretched about 17 miles on the river from the Ozark-Jetta Taylor Lock and Dam. Dead were freshwater drum, yellow bass, white bass, bluegill and sauger.
The Arkansas Game and Fish Commission said they tested the water, examined the dead fish and failed to come up with a reason for the mass die-off. District fisheries supervisor Bob Limbird said in his statement to the media that "fish kills are not that uncommon. But kills of this magnitude in Arkansas are rare."

In short, researchers in Arkansas simply did not know why the fish died.

The big fish kills weren’t happening only in the United States. Australian authorities said an estimated 5,000 dead fish were found in the Swan River near Perth. As it happened in January, which is mid-summer down under, investigators blamed the hot weather and suggested that low oxygen levels in the water killed the fish.

One Australian researcher theorized that heavy rainfall dragged nutrient-rich organic matter (farm fertilizer) into the river which caused the shift in oxygen levels.

In Brazil the Federation of Fishermen’s Colony of Parana said an estimated 100 tons of sardines, croaker and catfish died along the Atlantic coast near Parana in 2011. Researchers there failed to determine a reason for the mass die-off but suggested it was the result of "some environmental imbalance" or possibly a large chemical spill from a passing ship.

Also in January, 2011, hundreds of dead shad fish washed up on shore at the north end of the St. Clair River at Sarnia, Ontario. The Ministry of Natural Resources determined that the event was "a natural occurrence." They blamed warm weather followed by a cold snap that caused temperature shock.

One writer tied all of the events together when he covered a mass crab kill at Kent, England, also in January, 2011. He wrote: "As if thousands of dead birds falling from the sky and millions of fish turning up dead across the world in the past week weren’t enough, the Thanet Coast in the UK is now littered with tens of thousands of dead crabs that have washed ashore." The official cause of the crab kill was hypothermia.

In December, 2010, only a few days before the mass January kill, the New Zealand fishing trawler drew in a fish net filled with about 10 tons of dead fish south of Kawau Island. The local Fisheries Ministry investigated and said a trail of dead fish about three kilometers long was found.

The stories of mass kills that include whales and dolphins washing ashore, crabs, jellyfish and other sea creatures have continued to appear in reports all over the world since those fateful weeks in December-January 2010-2011. They are clear warning signs that our oceans are polluted and dying. Fishing crews are complaining that they are no longer able to return to port with their boats filled with the fish they used to catch. And the seafood we are offered as food is so filled with toxins that health officials warn against eating more than one serving of fish per week.

The massive oil spills from grounded tankers and the Deepwater Oil explosion and spill in the Gulf of Mexico in 2010 have had a major impact on the quality of the waters around the world.

Then there is the Fukushima disaster in Japan, which occurred on March 11, 2011 and continues to spill millions of gallons of toxic radioactive water into the Pacific Ocean daily. Experts say the radioactive isotopes have spread throughout the ocean and are reaching the coast of the Americas. The explosions at the plants also poisoned the air, spreading throughout the Northern Hemisphere of the planet.
​
Yes, Mr. Sprat, the fish kills are a concern, and one that we all should be taking seriously.