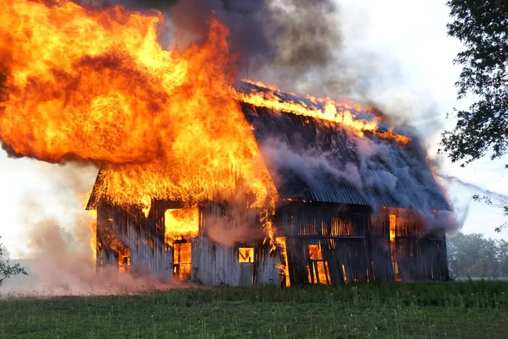 Our barn on the Hale Road property we once owned in Michigan was a massive structure. It had various parts to it, with the large main doors opening to the traditional hay mows on both sides of the main runway. We were allowing our neighbor to store his self-propelled combine there, and the main mow was filled with his hay. The other side was filled with miscellaneous farm-type things that were mostly there when we bought the property. This included steel fence posts, fence wire, some bee hives and lumber.

The northern side of the barn had a lower level with a concrete floor and stanchions that once were used for keeping milk cows. Our daughters kept a rabbit pen in there. They also kept a horse somewhere in that barn, along with the tack and riding saddle. I used another large and somewhat vast storage area on that side of the main floor to store our power mower, a wheeled lawn fertilizer and seed spreader, my garden tiller, rakes, shovels, hoes and other lawn and garden tools.

There was a second floor on the north side of that barn. It was a dark and forlorn place, and I do not recall using it for anything. We did set up a spook house in that part of the barn one Halloween and it proved to be a scary place, indeed, for the youth who dared to enter.

I have one strange memory of that barn. I was working in my garden, which lead almost from the front of the barn out to the road. All of a sudden, without warning, a crop dusting aircraft lifted up from directly behind the barn roof, its engine roaring as the pilot barely missed the roof. I was not aware of a crop duster working in the area before that moment, and did not hear it approaching. The bright yellow wings almost spanned the width of the barn roof. It was such a shocking experience I am sure I dropped my hoe.

We lost that barn and everything in it in a fire one spring Saturday that destroyed many of our fruit trees, almost burned my pickup which was parked within a few feet, almost killed our daughter Jennifer who was barely walking at the time, and if the local volunteer fire department hadn’t been on the job as fast as it was, we believe we might also have lost our house. It was a disaster.

Doris was away that day at work. I also was away, acting as a school chaperone for students on a special trip that weekend to Mackinaw Island and the Sault Ste. Marie locks. Our son was among the students on the trip. While we were off having a wonderful time, it was one of those rare Saturdays when our teenage daughters were home alone with Jennifer.

The origin of that fire was a mystery. Our mailman, Dan Tereschuck, happened to be at our mailbox at that critical moment. He saw smoke coming from the barn and noticed little Jennifer toddling into the open barn doors. Dan ran into the barn, grabbed Jennifer and was carrying her out just as the barn exploded into a mass of flame right behind him.  Dan also was able to physically push my pickup far enough away that it also was saved. The heat cracked the windshield, however. The girls saved the horse but lost all of the tack. They also lost the rabbits and we believed our cat perished in the fire. It was never seen again.

Doris rushed home from work and took charge of the situation in the house. The only picture I had of that fire was the one that appeared in our competitive newspaper, the Sanilac County News. As a local bureau reporter who was out of town I missed my own big story.

When our son and I pulled into the yard after our trip, we were shocked to discover that the barn was gone. In its place was a charred wasteland, a ruined hulk of a combine, and some burned out trees that had been growing close to the barn. Happy were we to find the family safe and well, and our house still standing. Everything in the house smelled of smoke.

A few days after the fire I happened to remember that I had been having coffee with a man who sold me a new insurance policy on our property. I had tried to insure our place with another agent but they only gave us limited coverage. This man assured me that all of the buildings, even our barn, would be covered in the policy I bought from him. That policy came in the mail about the day I left for our trip. I tossed it unopened on top of the refrigerator. I remembered that it was there, opened the envelope and read our new policy. The barn was indeed covered. The insurance paid for the fire call, getting the wreckage disposed of, and there was money left over. We used the money to take a vacation trip that summer.

After that barn burned, our interest in the property waned. I could never explain why that happened. That massive building dominated our back yard and was a distinct part of the personality of the property. After it was gone, it just didn’t seem the same when we drove in the yard. The next year we sold the place and moved on.
​
We have always felt deeply grateful to Dan Tereschuck for saving our daughter and taking the steps he did that day to keep our family safe.