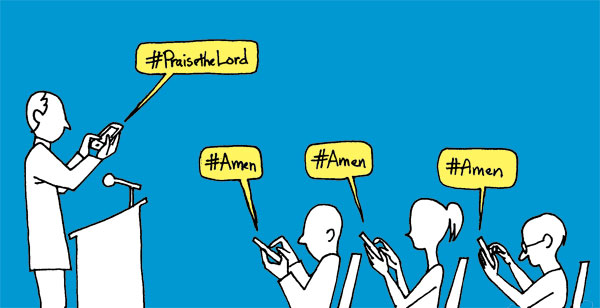 Twittering is the latest fad now sweeping the nation, if not the world. It is a unique invention by a San Francisco-based podcasting company named Odeo. It is described as a free social networking and micro-blogging service that allows users to send and read constant but short updates known as tweets.

The development of battery-powered mini-computers linked to cellular telephones has helped make twittering an international success. Not only are people able to be in constant telephone contact with friends and relatives, but they can twitter away, delivering one-line commentary that announces every move they make throughout every minute of every day.

As if anyone cares.

Suddenly the masses have been offered the perfect solution for keeping their empty minds occupied between football, baseball and basketball games. People can spend their days preoccupied with twittering rather than solving the growing environmental, social, political and spiritual problems confronting them.

As television cameras pan over them, we have seen the elected leaders of our nation busy twittering in the midst of great political events. Students twitter in class while they should be listening to lectures and filling their minds with tools for the future. Silly tweets now replace the reading of great literature, or just reading about daily news events.

So now we have yet another whimsical toy designed to divert our minds, our eyes and our full attention on the goal. It was bad enough when television evolved into an outlet for extreme athletic competition that seemed to overwhelm followers of the various “teams.” As the games are played, it is almost as if they become the center of focus, sometimes even for world leaders.

Americans, who have enjoyed the benefits of having more than most people in the world since the end of World War II, found amazing ways to waste those precious hours of idle time they once had. Instead of turning to family and friends for those memorable moments, seeking the arts or knowledge, they turned to golf, baseball, keeping green lawns and collecting things. While it is healthy for us to enjoy “hobbies,” it might be said the problem is found in obsession. We become so drawn to the hobby we overlook the important things that we should have done.

So how does twittering fit into all of this? The next time you attend a baseball, basketball or football game, look around you. We will bet that you will find fans busy passing tweets to friends or each other rather than watching the game.

Is this part of a secret plot by aliens to get us so preoccupied they can take over the world while we aren’t looking? If aliens exist . . . and from all the UFO reports we now are getting, it appears very likely they do, this may be closer to the truth than we might like to admit.