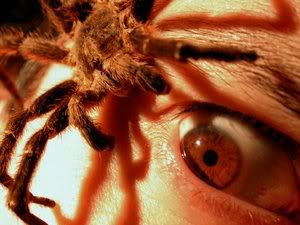 The word "primal" is defined as the first or the original. Thus the definition of primal fear is that it is the oldest and most basic fear, often stemming from childhood or possibly even from past life experiences.

German psychologist Otto Rank, like many of his peers, defines the sensation of primal fear as an "undifferentiated feeling of insecurity," or a form of anxiety.

Simple examples of primal fear might be a fear of spiders, or snakes, or a fear of dark rooms or closed-in places such as elevators and closets. Other primal fears may include a fear of death and a fear of being alone. We all may experience such sensations. And we usually don’t know their origins.

How may these fears be exploited as a method of mind control? We live in a world of false happiness and imitation love. Parents of children are known to pretend happiness when the love is gone, just for the sake of the family. People smile in social gatherings and fake happiness and good will when in reality they would rather be someplace else. They dream of fantasy romance that can never be reality. We tell people we love them when we have no concept of what it is like to really experience love.

Some people fear losing the person they love, or worse than this, they fear never experiencing true love. This is because they do not understand that love must be generated from their own hearts and then work outward before they can experience true love themselves.

We fear the unknown. Among the most vivid contemporary fears linked to the unknown is the fear of an apocalyptic future when many Bible believers and would-be prophets are forecasting an end of the world. Christian churches exploit this fear, promising that a savior Jesus will drop down out of the clouds and rescue "believers" at the last moment.

The rash of gun sales is linked to this apocalyptic fear. People who don’t expect last-moment reprieve from a flying savior are preparing for a Mad Max scenario after whatever horrific event occurs to destroy the organized and "civilized" world as we know it. They are hoarding food, water and other supplies and buying guns and bullets to defend themselves.

We live in a tortured world of our own making.

Don’t think government and military leaders are failing to exploit these fears. They not only are exploiting the natural fears, but they are creating a society controlled by manufactured fears.

We hear about wars and threats of terrorist attacks like the false flag 9-11 event that literally paralyzed the nation. They use the fears to push the masses into submission as they rebuild the American government to fit their plans for the future. Legislation is passed to "make us safe," but in reality, it is designed to strip us of our Constitutional freedoms. They are using our fears to keep us quiet while they turn our nation into a police state.

All of this is happening because we are allowing it. Those primal fears are blinding us to reality. We need to wake up to our personal mental ability to change the world around us and make it a happier place. We have the ability to create our own reality but we are allowing our fears to force us into unnecessary submission.

As one unidentified writer so beautifully expressed it: "A time comes in your life when you finally get it. When in the midst of all your fears and insanity you stop dead in your tracks and somewhere, the voice inside your head cries out – ENOUGH! Enough fighting and crying, or struggling to hold on. And, like a child quieting down after a blind tantrum, your subs begin to subside, you shudder once or twice, you blink back your tears and through a mantle of wet lashes, you begin to look at the world through new eyes. This is your awakening.
​
"You realize that it’s time to stop hoping and waiting for something to change, or for happiness, safety and security to come galloping over the next horizon. You come to terms with the fact that it is not Prince Charming and you are not Cinderella and that in the real world; there aren’t always fairy tale endings.  Any guarantee of ‘happily ever after’ must originate from within you."