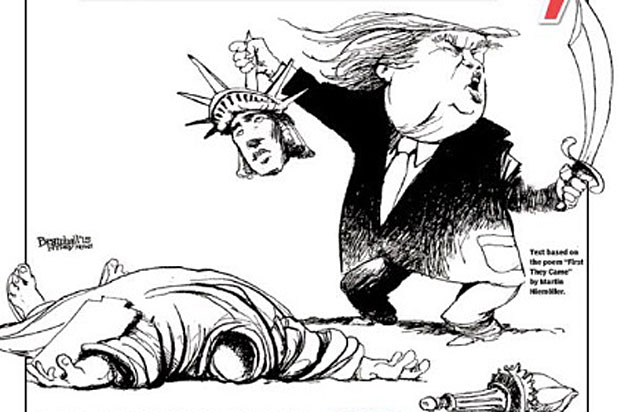 A Dangerous Nation Under Trump

Donald Trump has been attracting a lot of attention among U.S. voters who are fed up with the system the way it has become. They are so frustrated they appear to like the idea of putting a loud-mouth bully in the White House who promises to “make America Great” again.

What they don’t know is just how dangerous Trump’s ideas are, and how unprepared this man is for running the world's most powerful military nation in the world. Not only does Trump lack experience in the affairs of government, but he has never proven himself to be a keen businessman or a good negotiator when it comes to the sensitive issues of international diplomacy.

If elected to that high office Americans will be heavily dependent upon the ability of foreign leaders to take up the slack a time of extreme international tension. Not only has the U.S. incited terrorism by our radical actions in the Middle East, but President Obama has been carefully walking a tightrope in maintaining relations with other world powers like Russia, China, India, Pakistan, Israel, Iran, North Korea and the European block. These nations all possess or have access to nuclear weaponry which makes the demand for skilled diplomacy even greater.

This is no job for a buffoon like Donald Trump who gains media attention through shocking public statements. That he is bankrolling his own campaign and can get away with saying the things he says does not make him a fearless leader. The indications are clear that if he continues this behavior after taking office, the United States will be facing four looming years of serious trouble.

One of the most frightening points to the Trump agenda is his refusal to accept global warming as a real problem. He promises to disband the Environmental Protection Agency and leave it up to the states to deal with regulation of greenhouse gases, clean water and all of the other things the EPA was designed to guard. Trump flat-out says he believes climate change is a hoax. This is the kind of thing that went on during the terrible eight-year Bush Administration, and one of the reasons the world is facing the climate crisis it has now. The U.S. failed to assume a leadership role in tackling the most dangerous issue of our time.

As far as calming the threat of Islamic terrorism and bringing peace to the Middle East, Mr. Trump is not your man. He is a declared racist who not only hates the Mexicans but he doesn’t like Muslims much either. He says he wants to built a “wall” across the southern border with Mexico and deport an estimated 12 million people who have entered the United States without legal permission. He proposes ending birthright citizenship for children born in the United States to two non-citizen parents. He has pledged to ban all Muslims from entering the U.S. There is an estimated 1.6 billion members of the Islamic faith. Many of them are already in the U.S.

Trump wants to follow in the footsteps of American war criminals George W. Bush and Dick Cheney and allow for the use of extreme torture techniques. This is in violation of the Geneva Convention put in place after the First World War. Our use of torture now opens the door for our military men and women, when captured in war, to be subjected to the same. Bush and his buddies opened Pandora’s Box on this issue. Trump wants to jar the box open farther.

The man wants to pack the Supreme Court with far right conservative judges who will reverse the Roe vs. Wade decision and bring back a ban on abortion. He also wants the high court to rule the nation’s new health care legislation unconstitutional. He is already lining up a list of extreme right wing judges that he is considering to fill the Scalia vacancy.
​
Trump says he wants to defend “religious freedom” against what he calls anti-Christian secularists. We interpret this as a threat against anyone that dares to speak out against Christianity, worship any other faith or advocate atheism. There is a growing thread of Christian disbelief among the younger adults in the U.S. Trump sounds like he wants to force them to shut-up about it or possibly face criminal charges. That would be a return to the harsh severity imposed upon Europeans during the dark ages when the Vatican ruled over just about everybody.

This last one is a personal affront to me since I have spent a career in journalism. Trump wants to call on the high court to reverse the 1964 New York Times vs. Sullivan ruling that provides journalists and private citizens with First Amendment protections against defamation lawsuits. If a reporter writes a story that someone objects to, they would be free to file a defamation of character lawsuit. That would bankrupt news outlets and make reporters afraid to do their jobs.