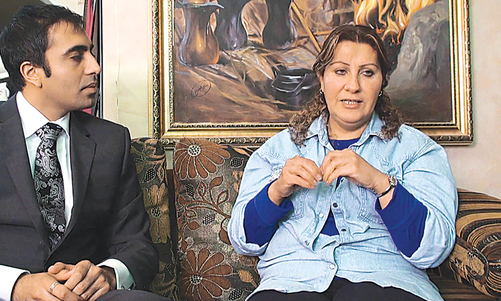 Sundus Saleh with her lawyer
Can She Bring George W. Down?

Sundus Saleh, an Iraqi woman, is representing herself and other Iraqi people in what is now a three-year-old lawsuit in U.S. Federal Court against George W. Bush, Dick Cheney, Donald Rumsfeld, Condleezza Rice and Paul Wolfowitz. Saleh is charging them with committing an illegal crime of aggression when they launched their brutal war against her country in 2003.

The Court for the Norther District of California dismissed the lawsuit in 2014 saying the defendants acted “within the scope of their employment” when they launched the war. Saleh’s lawyer, Inder Comar, took the case to the U.S. Court of Appeals where it is now being heard.

Saleh is arguing before the appellate judges that Mr. Bush and his compatriots acted “from personally held convictions that the U.S. should invade Iraq.” Her lawyer notes that Bush Administration officials knowingly lied to the people, linking Iraqi President Saddam Hussein to the al-Qaeda terrorist network and stating that he was hiding weapons of mass destruction. She says they told these lies to justify the decision to invade her country, kill and maim her people and bomb her nation’s infrastructure into rubble.

In his arguments Comar is comparing this case to what happened with Nazi Germany and the war crimes litigation that followed. He reminded the court that “Nuremberg held that domestic immunity was not a defense to allegations of international aggression. Everything the Germans did was legal under the law. We are asking the Ninth Circuit to reject the application of domestic immunity in this case.”

To support her arguments, Saleh has submitted to the court a copy of the Chilcot Report, a document recently published by an Iraq Inquiry Committee, which has just concluded an independent six-year investigation into events leading up to the U.S. and British invasion. The committee was established by the British government.

The report notes that Bush and British Prime Minister Tony Blair were planning the invasion of Iraq as early as October, 2001 and that the Bush Administration was drawing plans for the invasion early in 2002 even while troops were conducting warfare in Afghanistan following 9-11.

The report also included documents from legal experts who concluded that the war against Iraq was not only illegal but it constituted aggression without provocation against the people of Iraq.

The invasion also violated rules established for members of the United Nations, which prohibit the use of military force for anything other than self-defense or UN Security Council approval. The council did not approve the Iraq invasion and there is no proof that Saddam Hussein and his government posed any threat to either the United States or the UK.

Saleh’s suit is the first of its kind to be brought against Bush and his cronies in United States courts, which would have jurisdiction over their criminal acts while in office. Hers is not the first court case, however.

A few years ago the little nation of Kuala Lumpur conducted a war crimes trial in absentia, charging not only Bush and Cheney, but Donald Rumsfeld, and their legal advisors, Alberto Gonzales, David Addington, William Haynes, Jay Bybee and John Yoo for treating war criminals with cruel, inhumane and degrading treatment. The little Malaysian nation found all of them guilty.

Full transcripts of the trial were sent to the Chief Prosecutor of the International Criminal Court in The Hague and to the United Nations Security Council. The names are included in the Commission’s Register of War Criminals for public record.

After what was done to the Iraqi people, it is surprising that some kind of international action against the former Bush Administration has not been carried out.
​
One report stated: “the toxicification of Iraq’s environment and complete destruction of its social infrastructure by US imperialism have produced a growing public health catastrophe that constitutes one of the greatest war crimes of the Twenty-first Century.”
​
This is the legacy left by Bush and Cheney who have yet to be brought before an international court of justice to answer for what they have done.