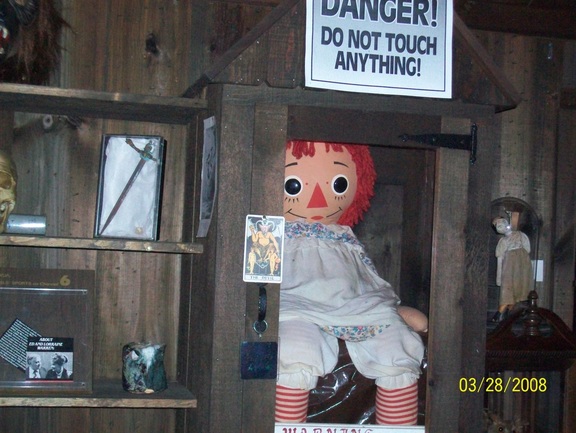 On display in an enclosed case in the Warren Occult Museum in Moodus, Connecticut, can be found a worn Raggedy-Ann doll. An imposing sign over the case reads: “Warning: Do Not Touch.” Though the smiling cloth doll looks perfectly harmless and inviting, there is a good reason for the warning. The doll is believed to be possessed by a demon.

The doll has a name: Annabell. This is the name of a child that died under mysterious circumstances near the home where the doll first made its appearance as a haunted object that moved around, wrote messages, and even appeared to attack the people it came in contact with.

It’s current owners, Lorraine and Ed Warren, operators of the museum and well-known paranormal investigators, say attempts at exorcising the spirit from the doll apparently were unsuccessful. The doll still is found to be moving around inside its case in the museum, even though nobody is touching it. Sometimes museum visitors say they hear growling noises coming from the case.

The origin of Annabell is unclear. As the story is told, the doll was purchased at an antique store as a gift for a college student named Donna. Donna, who was living with a roommate named Angie in a small apartment, tossed the doll on her bed and went about her business. But as the days passed, the girls noticed the doll began moving around the apartment. They would find it in odd positions, sometimes standing upright, or on chairs and other pieces of furniture. It actually was moving from room to room. The girls said they had not been moving the doll so how could this have happened?

Not long after this Donna said she began finding strange scribbled penciled messages in her apartment. She said they looked like the writing of a small child and were nearly illegible. The messages were simple, like “Help Us” and “Help Lou.”

Apparently Lou was Donna’s live-in boyfriend when that message arrived. And Lou did not like this doll. He kept warning that there was something threatening about the doll. That proved to be quite true, certainly for Lou. He began having reoccurring dreams about being personally attacked by the doll. One night he woke up to find bloody claw marks on his chest.

This was getting serious so Donna contacted a medium and a seance was held. The message received was that the doll was possessed by the spirit of Annabelle Higgins, a seven-year-old girl found dead in a field right where the apartment complex Donna was living in had been built. With this information, Donna decided the doll was probably not dangerous and did not dispose of it.
​
After Lou’s claw-mark incident, however, Donna contacted a priest who referred the problem to the Warrens. The Warrens investigated and concluded that the doll was probably possessed by a demon rather than the spirit of a child. They conducted an exorcism and just to be safe, took the doll from the home and locked it in their Connecticut museum. It has been there ever since.