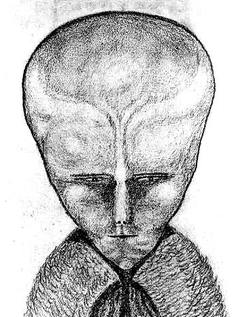 Lam
Aleister Crowley And The Extraterrestrial

English Psychic/Magickian/Writer Aleister Crowley conducted experiments in 1918 that he claimed led to a face-to-face meeting with an alien that he called “Lam.”

Thus Crowley, in addition to all of his other incredible achievements mostly in esoteric matters, became one of the first, if not the first contemporary to make contact and describe the being he believed was an alien from another dimension.

Even stranger is that Crowley began the magick experimentation that led to this meeting in New York City, in an apartment he rented at Central Park West. He had just left England at the outbreak of World War I on the infamous liner Lusitania. Then after a swing across the continent with visits to Vancouver, San Francisco and New Orleans, he took up with a New York woman, identified as Roddie Minor.

Crowley and Minor began what Crowley later called the Amalantrah Workings. They were performances of sexual and ceremonial magick in an attempt to open a portal to other dimensions and make physical contact with other intelligences. During his evocations, Minor, her mind opened with the help of hashish and opium, had visions of a king, a small boy and a wizard that introduced himself as Amalantrah. Thus the name of the project.
The wizard’s message to Crowley was to “find the egg.”

To anybody else, such a message might have fallen on deaf ears. But to Crowley, who only 14 years earlier had encountered yet another spiritual entity that dictated the words of Liber al vel Legis, best known as the Book of the Law, this message had a special meaning.
A verse in Chapter Two, line 49, quotes Hadit, the energy of the Universe as declaring “I am unique & conqueror. I am not of the slaves that perish. Be they damned & dead! Amen. (This is of the 4: there is a fifth who is invisible, & therein am I as a babe in an egg.)” This symbol, Crowley determined, is that of Harpocrates, the Egyptian image of Horus the child. He is seen as the babe in the egg of blue and seated on a lily pad.

The Book of the Law was delivered in 1904 as a warning to mankind. The warning was that unless we changed our course, we would bring about a premature death of our planet and consequently deal with the harsh new Eon of Horus.

While portrayed as an innocent child in one instance, the Egyptians also saw Horus as a hawk-headed god of war and vengeance. The warning was that if the human race failed to take care of the planet and shake off its dependence on enslaving religious systems, it would have to deal with the hawk-headed image of Horus.

The job of Horus is to assist the human race in making contact with Lucifer, our alien progenitor.

Thus the instruction by the mystical wizard to Crowley, via the woman in that New York flat in 1918, was not taken lightly by Crowley. That the world was at war at that time may have made it seem to Crowley that time was running out, and that it was his personal duty to make contact with the child.

Crowley may well have assumed that Horus would arrive as an alien. This would explain his intense interest in making contact through magick ritual.

Eventually Crowley succeeded in making contact with the alien figure in his remarkable drawing, which has a strong resemblance to contemporary descriptions of the alien contacts known as the grays. It is believed that Lam was a physical manifestation through a portal created by Crowley’s magick.

In those days, the term extraterrestrial was not in our vocabulary. Thus Crowley, who thought of the alien as something emerging from another dimension, wrote that Lam was of “inter-dimensional origin.”

The word Lam is a Tibetan word for “way” or “path,” also highly meaningful to an occultist like Crowley who was seeking a solution to a looming world dilemma that was happening before his eyes.

Crowley referred to himself as the Beast 666, as identified by Nuit in Chapter 1, verse 15: “Now ye shall know that the chosen priest & apostle of infinite space is the prince-priest the Beast,” even though the next line clearly informs him, as the receiver of the book, “But ye are not so chosen.”
​
Also in Chapter 2, verses 75 and 76, Crowley was given a puzzle that he spent a lifetime attempting to solve, even though the verse warns: “What meaneth this, o prophet? Thou knowest not; nor shalt thou know ever. There cometh one to follow thee: he shall expound it.”

That puzzle is a long line of numbers and letters that appears, at first glance, to be a jumbled mess: 4 6 3 8 A B K 2 4 A L G M O R 3 Y X 24 89 R P S T O V A L.
​
This is what Crowley was attempting to do with the Amalantrah Work. He had the right idea, but he was the wrong man attempting contact at the wrong time in history. That he was strangely silent in his writings about his meeting with the alien called Lam suggests that this entity was a messenger who may have helped him understand.