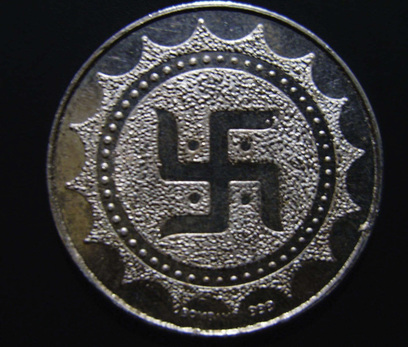 The Swastika Never Belonged To The Nazis

People all over the world today relate the symbol known as the swastika, or the cross with its arms bent to the right, to the German Nazi movement that led to the Second World War. Because it now has connotations of evil, it is rarely seen.
That is unfortunate because the swastika is a very ancient symbol that has been used, especially by religious groups, all over the world and for as long as there has been a recorded human history.

The swastika more commonly appeared with its arms bent to the left, although it was found to have them bent either way. It is said to be an archetype for the rotations of time and human consciousness, spiraling clockwise and counter clockwise, allowing souls to experience many levels of reality at the same time.

The image appears in art and design all over the world. This includes early civilizations within the Golden Crescent, the Hittites, Celts, Greeks, Asian, European, African and even the Native American cultures. The swastika still is a common symbol in Hinduism, Buddhism and Jainism.

The design is said to represent the sun, luck, Brahma, and general well-being. The very word swastika comes from the Sanskrit words su, which means “well,” and asti, which means “to be.”

There are at least two theories as to why this symbol gained global popularity among so many cultures at a time when there is believed to have been little or no social contact. One is that its symmetry and simplicity led to independent development everywhere once it became part of Carl Jung’s human collective unconscious library.

The second theory offered by the late Carl Sagan in his book, Comet. In the book Sagan includes images of ancient Chinese manuscript that depicts various comet tails. One of the tails shows a comet with four bent arms that look like a swastika extending out of it. Sagan suggests that sometime in the ancient past, such a comet passed so close to earth, and was spinning so that jets of gas could be seen streaming from it, all of them bent by the comet’s spin. People all over the world saw this in the night sky and consequently used it as a religious symbol at about the same time.

So why did the Nazis claim the symbol? It seems that after the discovery of the ruins of Troy, objects bearing the swastika were uncovered there by German archaeologist Heinrich Schliemann. Schliemann, on consultation with Sanskrit scholars Emile Burnouf and Max Muller, reached the conclusion that the swastika was an Aryan symbol.

The Aryans were perceived by the National Socialist German Workers Party, or Nazis, as key German ancestry reaching back to a super race of men who once lived in Persia and later migrated north to a mythological island known as Thule. The Nazi Party was a spinoff from an occult group known as the Thule Society, which sought purification of the human race. It was from here that Hitler drew his plan for creating a super race of Aryans.
​
The design for the Nazi flag using the swastika was created by Dr. Friedrich Krohn, a member of the secret Germanen order. His design, showing the bent arms turned left had a secret Cabbalistic meaning. It was believed that by reversing the arms, the spinning insignia generated a powerful chaotic force. Thus it became the secret occult symbol of the Third Reich.