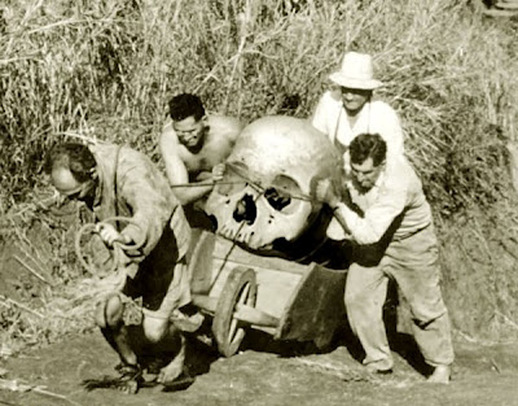 So Who Were The Nephilim?

Among the many sexy stories passed down by the Hebrews in the Old Testament, the most controversial has been that of the Nephilim, as told in the Book of Genesis.

Genesis 6:4, King James Version... There were giants in the earth in those days; and also after that, when the sons of God came in unto the daughters of men, and they bare children to them, the same became mighty men which were of old, men of renown.

This brief little paragraph, an event that the Biblical account goes on to say angered God so much that he brought on a world flood to eradicate all living things on the planet, is so filled with holes we can only speculate at just what really happened.

Some Bible translations, including the New American version, specifically identify this race of giants as Nephilim, a name that means “the fallen ones” in Hebrew. Yet another possible translation suggests the name means “those causing others to fall.
”
If we take this Genesis text at face value, as fundamental believers like to do, it suggests that alien beings (some say angels) identified only as “sons of God” came to Earth, fornicated (came in unto) with human women, and the unions brought forth children who grew up to become “giants” or “mighty men of old, men of renown.”

Anyone familiar with simple rules of biology, however, understands that the successful cross breeding of species, especially among the mammals of Earth, cannot occur, at least the way it is described in the Genesis account. An alien race of any form had to be humanoid, and closely akin to the women they were having sex with before an offspring could be successfully produced.

Possible solutions to this problem would be genetic manipulation of the DNA of Earth primates to produce the species that were called Nephilim, or the simple visitation by alien giants who lived for a while among Earth primates. This has been suggested by various writers down through the ages including Zecharia Sitchin, Erich von Daniken, newcomer Terry James and even ancient text like The Book of Enoch and the Epic of Gilgamesh.

Yet another possibility would be that the Nephilim were a unique evolutional humanoids that existed for a while on the planet before falling victim to the rule of natural selection. It is true that the bones of giant humanoids have been uncovered in various places all over the Earth, and we have known of “giants” even among contemporary tribal groups.

There are other ways to interpret the story in Genesis 6:4. For example, the term “giants” may have been a reference to the mental and physical accomplishments achieved by a certain race of humans known as the Nephilim. That they intermingled with the other tribes, and produced exceptionally bright children who grew to be great leaders, inventors, artists and achievers, thus earned the titles “mighty men of old” and “men of renoun.” The right DNA mixed with that of primates barely evolved from that of apes might have produced such children.

Yet another possibility is that the Nephilim were a furious war-like tribe that caused the people who came in contact with them to tremble in fear. Imagine a scenario where such a tribe of warriors moved in after a victory in battle, the men raping the women as soldiers have traditionally done after conquering an enemy, and mixing their seed with that of the natives. Such an event might have produced a record such as we find in Genesis 6:4.
Other stories have referred to unique visitors among us as the Anunnaki, Anakim, Rephaim and Reptilians.
​
Because of a vagueness in the presentation, and the fact that the entire Old Testament has been found to be a twisted version of Hebrew history, the real identity of the Nephilim may never be understood.