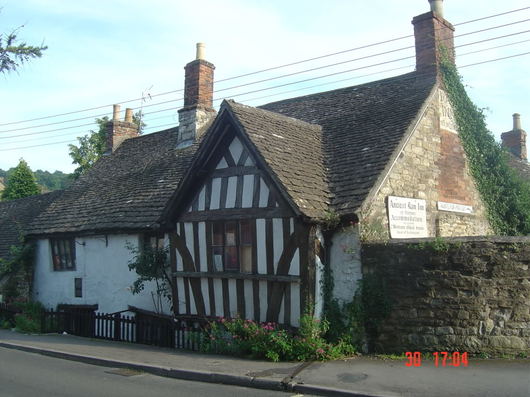 It most recently served as a bed and breakfast before becoming a media attraction. But the Ancient Ram Inn has a dark history that dates back nearly 1,000 years since it was built in the Gloucester village of Wotton-under-Edge.
The building has been owned by John Humphries, who has been restoring it since he bought it in 1968. He and his daughter, Caroline, once rented the rooms, mostly to ghost hunters and writers that came to experience spending a night with the supernatural.

Humphries, last known to be in his 90's, shared the structure with an estimated 20 ghosts.

Built in 1145 on the intersection of two of the well-known Ley Lines that crisscross the British landscape, the building has been host to so much paranormal activity that it is considered among the most haunted buildings in the world. There also is a legend that the building rests on a 5,000–year-old burial ground.

Strangely enough, the inn was constructed by St. Mary de Lode Church and used to house the slaves and workers who worked to build the massive stone cathedral that still stands in Gloucester today. It is an early structure serving the Church of England.

The hauntings over the years have allegedly caused guests to become so frightened they have jumped out of windows. People have claimed to have seen furniture flying around, envisioned the ghostly image of a little girl wandering the halls and one guest claimed to have been pushed down into a bed by what was thought to have been an incubus.

There have been no injuries, but the stories about the Ram Inn have drawn television and media attention, which in turn has attracted the ghost hunters. The cost of spending a night in one of the bedrooms used to run from 25 to 30 pounds. That is just $30 to $40 in U.S. currency.

Of course the legends about the place abound.

There is a "Witch Room" that they say is the place where a woman's spirit still lingers. She was captured in that room and charged with witchcraft before being burned at a stake in the Sixteenth Century.

A room titled "The Bishop's Inn" on the first floor is said to be the most haunted room in the building. It has had a reputation of scaring guests to the point of fleeing the building. It is said the ghost of a monk haunts the room.

One guest reported the apparition of a centurion on horseback that emerged right out of a wall. Then there are stories of a succubus that creeps into the beds with sleeping guests.

Media photographers have captured images of orbs hovering around the stairs and the attic. Orbs are believed to be images of spirits that can be captured by the lense of a camera. Of course people claim to have seen lights in windows that should not be there.

Townspeople are generally terrified enough of the building that they cross the street rather than walk directly past it at night.

Humphries said that on the first night he spent in the Inn he was grabbed by a "demonic force" and dragged from his bed. He says he saw ghostly apparitions in the building regularly and was "raped" four times by the succubus before he began carrying a Bible with him.

The intense haunting apparently did not discouraged Humphries from living in and restoring the historic structure. His zest for the old building cost him his family, however. His wife and children moved out.

During his restoration work Humphries said researchers found the skeletal remains of children under the staircase, and skeletons with broken daggers in them.
​
The Rt. Rev. John Yates, former Bishop of Gloucester, once conducted a failed attempt at exorcism. Afterward he said the Ram Inn was "the most evil place I have ever had the misfortune to visit."