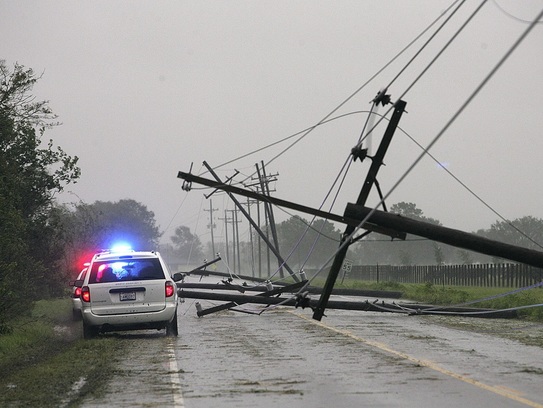 When The Power Is Gone

There is a strange unexplained effect experienced in the home when the electricity suddenly stops flowing. It isn’t exactly a silence. But the building feels almost “dead.” This is because our bodies, which are electricity charged, sense the electricity flowing through the wires of the walls.

This writer and his family have experienced long periods of time when the electrical service to our home has been interrupted. If often happens during a violent electrical storm, or when some vehicle slams into an electric utility pole, or perhaps an animal gets caught in a transformer and shorts a few key circuits.

Once my family and I went 14 long days without power following a winter ice storm that pulled down not only the electric wires but even many of the poles servicing homes in two or three counties of the rural area of Michigan where we lived. It was a long hardship attempting to live in a cold, dead house without heat, lights, or even the pump to provide running water. We rented a portable generator to pump water from our basement because our sump pump did not run. All of the food in our deep freeze and refrigerator spoiled.

Imagine then, what happens to entire cities subjected to the terrible floods and storms with 80-mile-per-hour winds that topple trees and cut power lines to millions of homes and business places. Electric crews are working long hard hours trying to restore power often during extreme weather conditions.

We Americans have grown up depending on electric power to do virtually everything for us. Before global warming created the extreme changes in our weather we enjoyed mostly dependable electric service. But now with extreme storms slamming our aging utility systems, power outages are getting more and more common.

When the power goes off, we are left almost helpless. Some of the elderly, the sick and handicapped may not survive in extreme heat or cold temperatures unless they get help.

This is the scenario: The homes are dark. There is nothing operating. Refrigerators are quiet. There is no television to watch. Only the battery operated radios are giving information as to how severe the situation is and how long people must wait for the power to be restored. People who live in cities with community water service will have running water in their pipes for a few days. Once the water tower is drained, if the town doesn’t have an emergency back-up generator to operate the water pumps, the water will stop flowing.

Hospitals are operating on emergency back-up generators. But they only have fuel for so many hours. After that, more fuel must be found. And that means trucking it. The trucks may not be able to run, nor will cars, if the fuel stations are unable to pump. This storms may span hundreds of miles, so trucking fuel could involve long trips to nearby states.

Nobody is going to work. There is not only a lack of gasoline to get to and from the job, but shops and offices are also dark. Everything is dark, quiet, and during summer months there is deadly heat building in all of the buildings. The heat builds in the brick and concrete of the office buildings so it doesn’t cool much after the sun goes down. Houses also are heating. If they are made of wood, the heat buildup may not be as severe. If people can get windows open during the night, they may get some relief before the sun rises again.

In cold winter climates the buildings quickly get cold in uninhabitable. Without alternate heating systems, like wood burning stoves, occupants are often forced to move out until the power returns.

Without power the old land line telephones are not working. Cell phones are working as long as the batteries last. Once the batteries die replacement batteries are almost impossible to find. The stores are dark and empty. Nobody is there to sell batteries, food or anything else. Frozen and refrigerated food is rotting in display cases.

Traffic lights may not be working. Streets may be blocked by fallen trees and power lines. People don’t dare go out. The only place to get cool from summer heat is in the basement if you have one. Without light it is dark and uncomfortable down there. In the winter, people double up under bed covers and wear winter coats, hats and gloves.

Towns struggle to provide emergency shelters for people, especially the elderly, who are forced out of their darkened electrically powered apartments. To remain in them would be to stay in unlivable death traps. Some of the newer apartment and office buildings were designed with windows that do not open. The unwritten assumption is that the grid would always be on and the rooms would be electronically heated or cooled.

America has become so dependent on electricity that lengthy shut-downs of this service may have a more severe impact on us than we ever imagined. And as the world goes through even more extreme climate changes, major storms like this, and the loss of power, public services and even food and water may become common.

If you haven’t experienced such a disaster as yet in your neighborhood, perhaps it is a good idea to start preparing for it. Store up some bottled water and food. Get a battery operated radio and extra batteries. Store up flashlights, candles and possibly even a small gas-fired portable electric generator.

If you want to see what living without electricity feels like, flip the main breaker on your house electric service box and find out how long you can live comfortably without the power we have grown to take for granted. One thing about it; life becomes very quiet without electricity. It is a great time for thought and meditation.