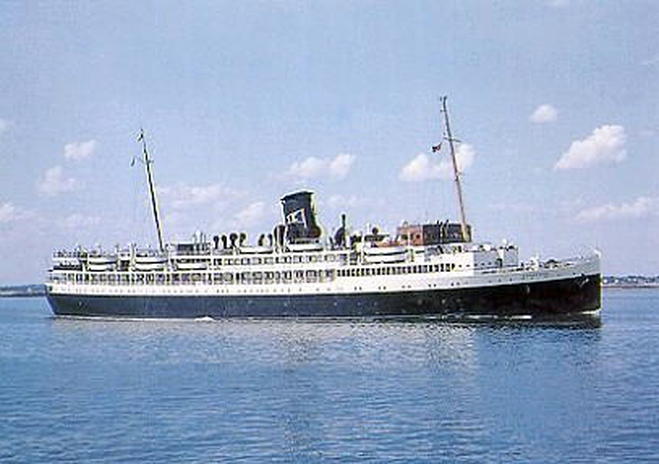 Burning Of The Yarmouth Castle

An incompetent skipper and untrained crew was blamed for the deaths of about a hundred passengers and crew members when the cruise ship Yarmouth Castle burned during a Caribbean cruise on Nov. 13, 1965.

The fire that started around 1 a.m. in one of the cabins quickly spread through the wooden superstructure of the 39-year-old vessel, pitting 373 passengers and 174 crew members in a battle for their lives.

The liner, commanded by Capt. Byron Vatsounas, was in the midst of its regular New York-to-Nassau run when crew members smelled smoke and began a search of the decks. It was first noticed when a crew member in the engine room caught a wisp of smoke and reported it to the Chief Engineer. The engineer, without contacting the bridge, conducted an unsuccessful search of the galley, pantry and bakeshop areas.

He met a night cleaner in the main entrance lobby who said he also noticed smoke in the men’s toilet on the promenade deck, just above cabin 610. When they went forward to investigate, they found the cabin ablaze. The bridge was then notified and the night cleaner went aft to wake up the crew.

The chief engineer ran out fire hoses and personally fought the fire. Later he turned the job over to crew members while he ran back to the engine room to turn off the mechanical ventilation system. He thought the vent was feeding oxygen to the fire.

The captain failed to sound a general alarm, but the sleeping passengers were quickly becoming aware of the fact that something was very wrong. Crew members were running down the long corridors, banging on doors and shouting. Other people, trapped in cabins by smoke and flame, were being rescued by crew members who broke open their windows and, for those who were thin enough, pulling them through portholes. People were shouting and screaming as they discovered the danger and raced through smoke-filled hallways to doorways to the deck.

The fire raced through the ship that morning because its 39-year-old wooden superstructure, extra dry from years of steaming under a tropical sun, and saturated after years of being covered and recovered with oil-based paints, were a perfect fuel.

Crew members found that many of the liner’s life boats, which were not kept in good condition, were literally frozen by layers of paint to the davits. Because Captain Vatsounas believed the fire could be contained, he failed to tell his radio operator to send an S.O.S. By the time he realized his error it was too late. The fire had spread to the radio room.

Fortunately, the Yarmouth Castle was in a regular shipping lane and other vessels were close enough to see the glow from the fire in the night sky. The liner Bahama Star and a cargo ship, the Finnpulp, both arrived in time to save about 450 lives.

The Bahama Star no sooner arrived on the scene when a raft from the burning liner drew alongside. From that raft stepped Capt. Vatsounas and other officers. That the captain left his burning ship while passengers were still aboard and fighting for their lives so angered the crew of the Star they locked him in the captain’s quarters.

Witnesses said the Yarmouth Castle was by then a raging inferno, burning from amidships with the fire spreading both fore and aft. The heat was estimated at about 2000 degrees. It was so hot that the paint on the funnel of the Bahama Star started to burn. Somebody on the Star used a home movie camera to get pictures that showed outlines of people running around on the burning ship, trying desperately to escape the flames.

Both the passengers and crew of the Bahama Star were touted as heroes by the newspapers of that day. They not only sent lifeboats into the water to pull swimmers to safety, but many passengers gave up their cabins so the injured survivors had a place to be tended to.

The Finnpulp, which arrived later, also sent skiffs and boats with powerful lights to search the waters around the burning liner for survivors.

The Yarmouth Castle keeled over to port and sank at about 6 a.m., about five hours after the fire was first noticed. It sank in about 1,800 feet of water.

During an inquiry that followed, Captain Vatsounas was charged with gross incompetence, negligence and manslaughter. Cruise Operator W. R. Lovett was charged with improper maintenance of the ship.

The board of inquiry determined that poor wiring, improper storage of combustible materials, and poor maintenance of rescue equipment were all factors in the disaster. Also, the crew had failed to perform safety drills, and the crew members were never trained to use the fire-fighting equipment.

The disaster led to the creation of the SOLAS rules requiring ships at sea to meet certain international safety requirements. No longer would new ships be built with wooden superstructures. Also safety equipment would be inspected and crews would be trained to use it. Routine safety drills were now required.

The SOLAS rules are still being practiced today.