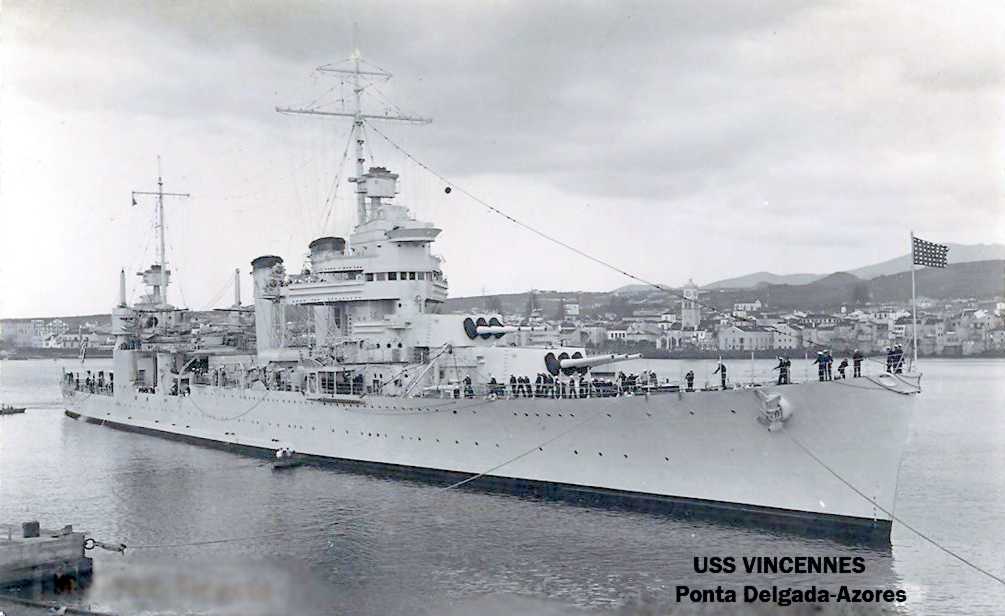 Among the great fighting ships of the U.S. Navy during the Pacific Theater in World War II was the heavy cruiser USS Vincennes, sunk during the Battle of Savo Island in August, 1942. A total of 332 sailors out of an estimated compliment of 866 perished in the battle.

Launched at the Bethlehem Shipyard in Massachusetts in 1936, the ship bore the name of Vincennes, Indiana throughout her career during those turbulent war years. She was 588 feet in length and was equipped with four aircraft that could be launched from catapults plus an armament ranging from big 55 caliber cannons to 20 and 25 millimeter anti-aircraft guns.

While the war clouds were already building over Europe Vincennes was actively involved in patrolling U.S. coastal waters from New York south to the Gulf of Mexico and along the west coast. She was anchored off Tompkinsville, New York on September 1, 1939, the day Adolf Hitler’s legions marched into Poland and war officially broke out in Europe. She was at anchor in Casablanca when Italy declared war against France.

Vincennes was on convoy duty in the Atlantic on December 7, 1941 when the Japanese attacked Pearl Harbor. Suddenly the U.S. was plunged into a war on two fronts.

Attached as an escort to the carriers Hornet and Enterprise, the task force steamed off early in the war laden with 16 Army B-15 Mitchell bombers that managed to bomb Japan the following spring. Vincennes was involved in various battles off Midway, Guadalcanal and finally the Solomon Islands where it was sunk in a fierce engagement with Japanese forces off Savo.

On that fateful day Vincennes, under command of Captain Frederick Louis Riefkohl, joined the cruisers Quincy and Astoria as an escort force off Savo to screen vulnerable transports that were unloading to the invasion beaches. In the early morning hours of August 9 the ships were met by six Japanese cruisers and one destroyer and a fierce battle ensued. The Vincennes was hit an estimated 85 times by enemy shells and at least two torpedoes before it was afire, her engines stopped dead in the water and her guns out of action. All three U.S. cruisers were destroyed in the battle.

Riefkohl, who survived the sinking, later wrote: “The magnificent Vincennes, which we were all so proud of, and which I had the honor to command since 23 April, 1941, rolled over and then sank at about 0250, 9 August 1942, about two and one-half miles east of Savo Island . . . Solomons Group, in some 500 fathoms of water.”
​
Historian Samuel Eliot Morison wrote that Riefkohl suffered a broken spirit over the loss of his ship.