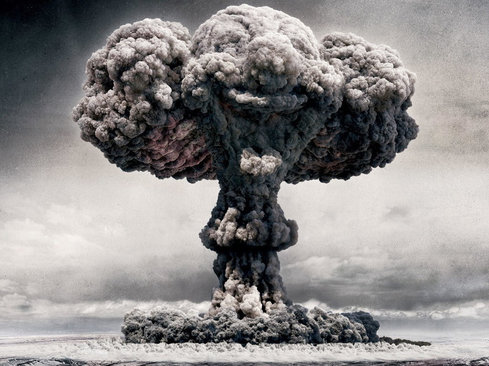 There is a world prophetic warning about angelic trumpets that will sound to announce the end of days of the world as we know it.

Best known are the verses in the Book of the Revelation that speak of the angels blowing seven trumpets . . . each trumpet bringing a new rash of death and destruction upon the world. The Qu'ran contains numerous warnings about trumpets that bring disaster to the Earth. The aboriginal people also speak of such things. There is a Hopi prophecy about a gourd of ashes that appears in the last days.

The Hopi prophet was probably not familiar with metal flare of a trumpet bell so he identified his vision as something familiar to him. Hopi people live on the earth, so the vision resembled the fruit of a plant.

Why were all these ancient prophecies of disaster linked to a reference of a horn, or trumpet that sounds a loud noise? We suggest these were visions of atomic bombs exploding.

When you think about it, every photograph we have of nuclear explosions show a force the follows a long relatively straight flow of energy moving directly upward before it flares outward into what we have referred to as the "mushroom shape" at the top.

The cloud clearly takes the shape of a metallic horn, especially the early horns that were straight conical shaped instruments and blown to make a single loud sound. That sound was a loud blast used to draw public attention to an event or an announcement on behalf of the king. At that time in history, the horn blast may have been among the loudest man-made noises known to humanity.

A close examination of the references to the trumpets in the Qu'ran makes it clear that each time the instrument is sounded, something very spectacular is occurring on Earth. It is difficult to say if this is more than one reference to a single event, or if they are descriptions of numerous events.

From 18:99 we read: "On that day We shall leave them to surge like waves on one another: the trumpet will be blown, and We shall collect them all together. And We shall present Hell that day for disbelievers to see, all spread out - disbelievers whose eyes had been under a veil from rememberance of Me, and who had been unable even to hear."
Then from 20:102: "The Day when the Trumpet will be sounded: that Day, We shall gather the sinful, blear-eyed (with terror)."

And 23:101: "Then when the Trumpet is blown, there will be no more relationships between them that Day, nor will one ask after another!"

Each of these verses points to an event that is causing great dissention among the people. It is referred to as Hell for the disbelievers, the people "blear-eyed" with terror, and every person trying to save his or herself, no longer asking after one another.

Now we come to the more severe warnings in the Qu'ran. In verse 50:20 we read: "And the trumpet shall be blown, that is the day of the threatening."

Verse 69:13: "Then, when one blast is sounded on the Trumpet, And the earth is moved, and its mountains, and they are crushed to powder at one stroke - On that Day shall the (Great) event come to pass. And the sky will be rent asunder."

Verse 74:08: "Finally when the Trumpet is sounded, That will be - that Day - a Day of Distress - Far from easy for those without Faith."

And finally in 78:18: "The Day that the Trumpet shall be sounded, and ye shall come forth in crowds, And the heavens shall be opened as if there were doors, And the mountains shall vanish, as if they were a mirage."

The descriptions of mountains crushed to powder at a single stroke, the sky rent asunder, and the heavens opened as if there were doors, could all be attempts to describe the results of the force of nuclear explosions as observed by the prophets from the distant past. They had no better way of describing what they were looking at.

Now we will take a brief look at the predictions of the angelic blowing of the seven trumpets on the day of judgment as written in the Book of the Revelations.

There is a second trumpet sounded and "something like a huge mountain, all ablaze, was thrown into the sea. A third of the sea turned into blood, a third of the living creatures in the sea died, and a third of the ships were destroyed." (8:8)

Trumpet three involves Wormwood, the name we now associate with the Russian nuclear power plant disaster at Chernobyl. The verse reads: "a great star, blazing like a torch, fell from the sky on a third of the rivers and on the springs of water - the name of the star is Wormwood. A third of the waters turned bitter, and many people died from the waters that had become bitter." (8:10)

The fifth trumpet brings on the advent of the woes. "I saw a star that had fallen from the sky to the earth. The star was given the key to the shaft of the Abyss. When he (the angel?) opened the Abyss, smoke rose from it like the smoke from a gigantic furnace. The sun and sky were darkened by the smoke from the Abyss. And out of the smoke locusts came down upon the earth and were given power like that of scorpions of the earth. . ." (9:1)

After this there is a peculiar change of events. "It said to the sixth angel who had the trumpet, 'Release the four angels who are bound at the great river Euphrates.' The four angels who had been kept ready for this very hour and day and month and year were released to kill a third of mankind." (9:13)

Verse 18 warns: "By these three was the third part of men killed, by the fire, and by the smoke, and by the brimstone, which issued out of their mouths."

The seventh trumpet, which follows a long description of the war, death and suffering that sweeps the Earth, brings about an end to the horrors. "God's temple in heaven was opened, and the ark of his covenant could be seen in the temple. There were flashes of lightning, rumblings, and peals of thunder, an earthquake, and a violent hailstorm. There were loud voices in heaven saying, 'The kingdom of the world now belongs to our Lord and to his Anointed, and he will reign forever and ever.'"

This is the Biblical viewpoint. In reality, a prolonged global nuclear war such as described in these verses will certainly bring about a fast conclusion to the life of our planet, and consequently a quick extinction of us all. The god that builds a new heaven and a new earth exists within us, and if we fail to give ourselves enough time to do this work, there will be no future.

These verses in the so-called "holy books" were written as warnings as well as prophetic visions. All prophecy is merely a glimpse at probabilities, and they are not visions of events that have to happen.
​
The human race has a choice. We do not have to push the buttons that launch nuclear bombs on ourselves. That would be physical and spiritual suicide, and subconsciously we all should know this.