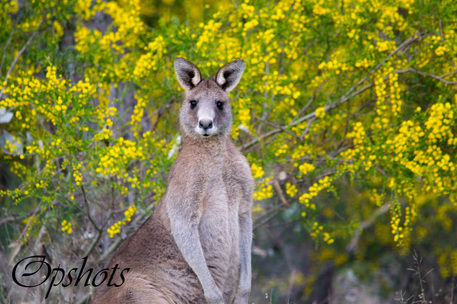 It was in 1974 that stories about a kangaroo running at large in the streets of Chicago and the city’s suburbs began circulating. It began with an odd report in the Chicago Tribune on October 19, and got wildly out of hand after that. The beast, which was never captured, has since become part of the strange mythological collection of strange and unexplained stories that are fun to tell around campfires.

In the original report, an unnamed visitor from Australia allegedly called the Chicago police to report a pet kangaroo that went missing. The animal was soon sighted in the Jefferson Park district, two police officers cornered it between two houses but the kangaroo kicked its way out of the trap and made its escape. The newspaper made light of the story. The headline read “Keystone Kops Go On Kangaroo Caper”

After the first story appeared, police began getting reports from all over the city from people claiming to have seen or encountered the phantom kangaroo. A later news report said police were having a hard time taking the reports seriously because they could not confirm that a kangaroo was really running at large and no one had reported a missing kangaroo. It seems that the original Tribune story was a fabricated joke and the creation of a writer with nothing better to do with his or her time that day.

Or was it? From research conducted in newspaper microfilm records we knew that wildly fabricated stories were popular during the days of “yellow journalism” when writers sought to capture the attention of readers with sensationalism at every turn. Also, people seemed to have more time to read newspapers in the days before television, computers and all of the other forms of evening entertainment began clogging their free time. But made-up sensational stories about kangaroos hopping wildly about the streets of Chicago were not something to have been expected during the 1970s.

After a second Tribune story about the escaped kangaroo appeared, the story was picked up by the wire services and began appearing in newspapers all over the United States. In fact, the story also began appearing in Australian papers. Radio stations began playing the old tune “Tie Me Kangaroo Down, Sport” as the story spread.

President Gerald Ford joked about the wild kangaroo during a gathering of Republicans in Chicago.

It wasn’t long before the kangaroo sightings began spreading out. By November 3 sightings were reported in Plano, about 50 miles southwest of Chicago. On November 13 a kangaroo was reported by three different people in Rensselaer, Indiana. And on December 11, the Wall Street Journal reported that police in two states were in pursuit of the kangaroo “with guns and helicopters” after receiving nearly 50 sightings over a 250 mile area.
​
As far as we know, nobody ever captured this wayward kangaroo and such a creature probably never really existed, except perhaps in the minds of people that thought they saw it.