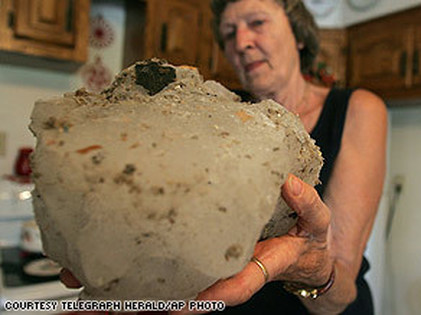 Falling Ice Blocks Are Getting Larger

In our ongoing search for odd world events we have posted stories in the past about giant mysterious blocks of ice that seem to be falling to earth, often from a cloudless sky. Some of these ice balls have been large enough to do severe damage to property.

The latest round of falling ice stories is starting to get a bit scary.

In January, 2010, a group of bird watchers walking on the beach Oland Island on the southeastern coast of Sweden came upon about 200 football sized balls of ice on the shore. It was theorized that some odd event caused them to form in the water before tossing the balls ashore. But that was never proven.

Chunks of ice measuring as large as basketballs and weighing up to eight pounds pelted southern Spain from cloudless skies over a 10-day period in January, 2000. The ice crushed car hoods, fell through roofs and caused extensive damage to everything they struck. One woman was struck in the shoulder.

In July, 2006, an ice ball described to be as large as a microwave oven landed in a street in Douglasdale, South Africa.

Perhaps the grand-daddy of all the ice balls was the massive block found by mushroom hunters in a forest in Milovice, in the Czech Republic, in July, 2011. The ball was so large that it was estimated to have weighed tons. It was surrounded by mud from the ice that had melted, suggesting that the ball was much larger when it first dropped.

The problem with the Czech ice ball was that meteorologists did not believe it could have fallen from the sky without shattering on impact. But there were no marks on the ground indicating that it had been dropped there from a truck and neighbors said they did not remember a helicopter flying over during that time.

Since the incident in Spain, Professor Jesus Martinez-Frias of the Centro de Astrobiologica in Madrid has been studying the phenomenon of falling large blocks of ice and collecting similar reports from around the world.

The Frias team now reports similar ice falls have occurred in Argentina, Australia, Austria, Canada, Colombia, the Netherlands, New Zealand and the United States. There have been more than 50 confirmations, and what is really scary, the ice balls appear to be getting bigger. Some have been calculated as heavy as 25 to 35 pounds. A 440-pound block of ice was recently reported in Brazil.

Frias has dubbed these big ice blocks megacryometeors. He believes they are different than hail. They do not appear to originate in storm clouds but seem to drop out of cloudless skies.

The cause of the ice phenomenon remains a mystery. A study of atmospheric conditions on the week of the Spanish ice falls revealed an anomaly occurring in the troposphere. Ozone levels were unusually low over southeastern Spain which allowed more solar radiation, which was in effect, cooling the lower stratosphere. It was also learned that the lower stratosphere was unusually moist during that period.

Just how all of this may have worked together to create giant balls of ice that fell to earth is still a mystery.