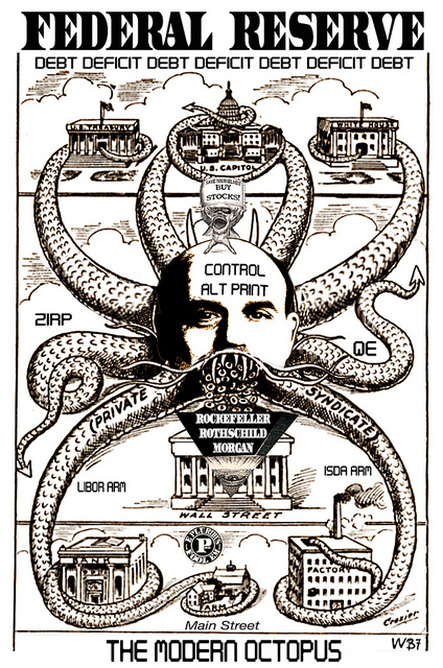 Power of The Federal Reserve

Americans and perhaps some of the elected representatives in Washington seem to believe that we all must depend upon the Federal Reserve to stabilize the nation’s financial system and keep the wheels of commerce running smoothly.

Indeed, we once considered Alan Greenspan, long-time chairman of the Federal Reserve, as one of the most powerful and influential figures in the world of finance. Later the bearded face of Ben Bernanke filled that void and wielded as much power as Greenspan did. Today a woman, Janet Yellen, a noted economist, chairs the position.

Writer David Quinn in an article for The Cutting Edge said most Americans erroneously believe the Federal Reserve is part of our government. It is, however, a privately held corporation owned by stockholders representing the largest banks in the land. The Federal Reserve holds its power because Americans have been led to believe that it should have it.

Quinn wrote that “if the American public understood what their (Federal Reserve) policies have done to their lives, they would be rioting in the streets.

“In less than one century the Federal Reserve Bank of the United States has destroyed our currency and has allowed bankers to gain unwarranted power over the country. They had the ability and opportunity to bring down the worldwide financial system,” Quinn wrote.
The U. S. Constitution gives the power of making money to the Congress. Congress also has the power of regulating its value. The Constitution also requires that money be coined of gold or silver, and that paper bills, if used, must be backed by their printed value by gold or silver maintained in government vaults.

Thomas Jefferson, a former president and one of the framers of the Constitution, once warned that “if we turn our monetary system over to the bankers our children will wake up as slaves to the country we fought to free.” Jefferson understood the power of greed that has historically emanated from the hearts of the few that rise to possess and control the wealth.

In 1913, the very thing that Jefferson warned us about happened. On Christmas Eve that year, while many members were home with their families for the holidays, a key number of congressmen met for a special session in Washington to pass the Federal Reserve Act. This is an unconstitutional act that turned over the U. S. monetary system to a few international bankers. The act was signed into law by President Woodrow Wilson, who advocated a better system of stabilizing the monetary system.

With the banks under the control of the Federal Reserve, the rules for printing money changed. Our dollar bills once were considered a representation of their value in gold stored in places like Ford Knox, Kentucky. The old bills once stated this. Now our bills are identified as Federal Reserve notes. This means that they are loans or I.O.U.s and are no longer backed up in value by gold reserves. And that is in clear violation of the Constitution.

Did the Federal Reserve bring the stability to our monetary system as President Wilson had hoped? Indeed, it did not. By 1928 America and the world banking system was plunged into the Great Depression, largely because of the same kind of reckless banking activities and false printing of paper dollars that brought about the 2008 world economic crisis.

While climbing out of the Great Depression and numerous “recessions” over the years, we have experienced a slow decrease in the value of the dollar, caused by the Federal Reserve’s printing of more money than there have been gold reserves to back up the value. This, in turn, has been causing an inflationary spiral that has been slowly destroying the American capitalistic/industrial system.

Notice that one day after the Republicans gained control of the Congress and the promise of a stronger yoke on the nation’s financial system in mid-term elections, the Federal Reserve announced a decision to print another $600 billion under the guise of propping up the big banks.

That was a time when jobs were plentiful. There was opportunity for advancement and if the job we had didn’t work out, we could move on to find employment elsewhere. Employers used things like health insurance benefits and paid vacation time to coax good workers to stay on the job. Some employers also awarded workers with a Christmas bonus at the end of the year and a day off from work on birthdays.

We thought we were living in an era of promise and opportunity. Little did we know that the robber barons were hard at work, dismantling the monetary system that made it possible for us to enjoy that way of life.

The rise of the “Tea Party” within Republican Party ranks, and the brief take-over of Congress by the G.O.P. brought gridlock to Washington. All eyes are on radical candidates seeking the Republican Party nomination for the 2016 Presidential Election. The movement appears to be in favor of federal spending cuts while the nation plunges multi-trillions of dollars in debt. But the money is mostly going to the military and keeping the banks afloat. The Middle Class is disappearing as good jobs move overseas. Benefits for the poor and elderly are drying up. The national infrastructure is falling into ruin.

While the wealth is still found in the United States, it is controlled by a few individuals, the banking system and big corporations. It is not in circulation. Thus the United States is no longer the great nation of promise it once was.

Can the Federal Reserve and the big banking system in America be classified as the shadow government controlling us? While it is an all-powerful institution that has unbelievable influence over the wealth of the nation, we believe it falls short of being a shadow government.