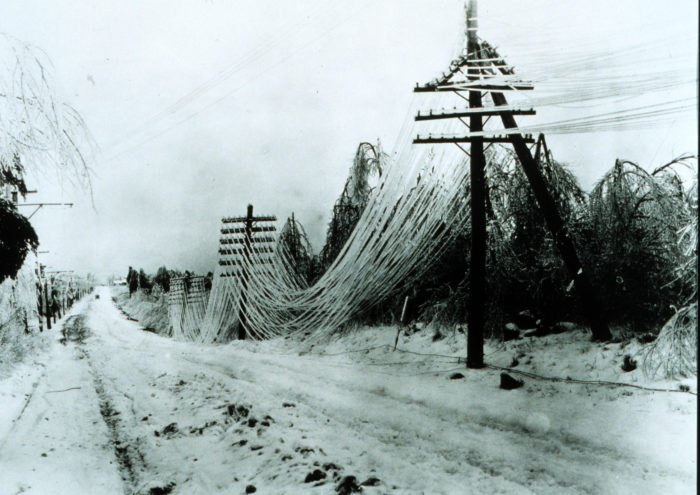 It happened on March 2 on Aaron’s birthday. I remember that because when we moved back into the house two weeks later, remnants of his birthday cake and the dirty dishes from the birthday meal we were enjoying that evening were still on the kitchen table.

The ice began accumulating on the trees, utility wires and roadways sometime in mid-day. I had been out on assignment and had to drive home on ice slicked roads. We had had ice storms before and assumed this was a brief event and that it would soon change to all rain or turn to snow within a short time. But that did not happen.

That evening as we were just finishing our dinner, we began hearing large limbs from the trees in our yard breaking off and crashing to the ground. Then the power went out and we knew we were in trouble. We found our flashlights and candles and attempted to make the best of the evening, but with the heat off, the house cooled quickly. The only comfortable place to go was in our beds.

It was a long sleepless night because the storm continued on. We heard the thunderous sound of large tree limbs and entire trees and even utility poles crashing to the ground. The landscape turned white from the sheen of ice building on everything. It turned into ice crystals by morning. Also there were occasional blinding flashes of lightning, intensified by the glaring ice, and loud claps of thunder. It was the strangest storm we were ever in. One deputy said he thought it sounded like we were in a battlefield.

With all communications out, it was difficult to find out just how large an area the storm affected, or what we could expect in the way of help. I managed to get into my car and get it thawed by letting the motor and heater run. Then I made my way into Sandusky. Utility poles and trees were down everywhere, sometimes blocking the road. Road crews had been out clearing the roads so I had no trouble getting to my office. But I found that telephone lines were not working. The power was off for a while in Sandusky, but it was restored quickly so I had heat and lights in the office.

The police informed me that the ice storm hit us the hardest, but the damage was broad in its scope. It covered all of Sanilac County, parts of neighboring Tuscola County to the West and northern St. Clair County to the South. I found that the old teletype machine still was in working condition and that I could still use it to transmit messages to Port Huron. I wrote my story and sent it by teletype, then drove around, getting amazing photos of trees, utility lines and everything else covered in ice so heavy the limbs that didn’t break were bent almost to the ground.

When I got back to the house that afternoon I found the family still in bed, trying to keep warm, and without any means of cooking or just living a normal life style. From what I had learned during my explorations in town, there was so much damage to power lines and utility poles the Detroit Edison Company was calling in emergency relief from hundreds of miles around to assist in restoring power. Highest priorities were being placed on cities, schools and villages. People living on rural country roads, like us, were going to have to wait. The wait might be for weeks, I was told. We decided we could not stay at home and moved out that evening. We poured antifreeze in the drains, packed what we thought we needed and drove north to the farm near Port Hope, thinking that going to Cass City would still be in the ice. We were relieved to find that the storm went south of Port Hope and my parents still had power on the farm.

We lived at Port Hope for the next fourteen days until the power was back on at our home. In the meantime, we drove back and forth into Sandusky . . . Doris going on to work on her shifts in the hospital and the kids to school. I made regular visits to the house and discovered to my horror and as things began to thaw, our basement was filled with water and the water was riding by the hour. With no power our sump pump was not working. By the time I discovered it, the pump motor and motors on our washing machine and clothes dryer were already under water. The water was threatening to flood our oil-fed furnace. We also had a freezer filled with meat, fruit and vegetables in the garage that was beginning to warm. Something had to be done.

I made an attempt to buy a portable generator but found that everybody else was having the same emergency and had been there ahead of me. There wasn’t a generator to be had, and if I did find one, I was sure the price would have been too high for my pocket. We went home that night in despair. Dad came to our rescue. He called one of his neighbors who he knew had a portable generator and pump, and made arrangements for us to borrow it. I picked it up and drove back that night to Sandusky, some 40-miles away, set it up and got it running.  I stayed at the place late that night pumping the water out of the basement and running the freezer, making sure everything was cooled back to the temperature it was supposed to be.

This became a daily routine after that. Every noon hour I drove from the office to the house, turned on the generator and pumped the water out of the basement and ran the freezer. I found that the water came right back by the next day.

When the power did come back on, it came on with such a surge it burned out our refrigerator. I realized that I should have unplugged it. I had to buy a new sump pump to replace the old one. And we also had to replace our clothes washer and dryer. All that I had saved was the furnace motors, which had probably been worth the effort. The food in the freezer was all spoiled and had to be tossed anyway. It took a long time to get our house back in order after that ordeal.

The President declared our county a disaster area which was supposed to have entitled us for disaster relief. I applied and quickly found that federal disaster relief is not for the common folk. It was relief for big farming operations and big business. The rest of us just bit the bullet.

It was after this that Doris’ brother, Wayne suggested that we start burning wood so we would never be forced out of our home again. I made the jump, bought and installed a wood burning furnace in the basement, bought a used pickup and a chain saw, and began cutting logs.