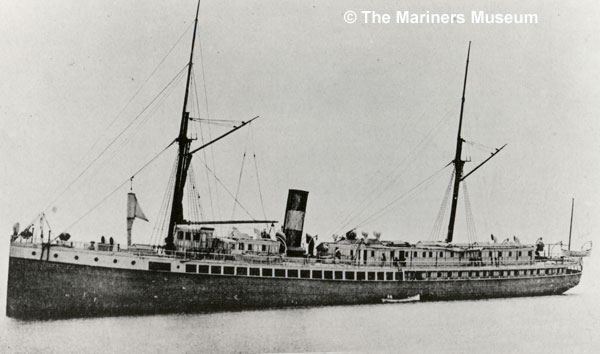 The wreck of the City of Columbus on the New England coast on January 17, 1884 claimed 104 lives and brought down the Boston and Savannah Steamship Company. It was a senseless disaster that never should have happened but for a decision by the captain to turn command over to an incompetent subordinate.

The City of Columbus was a five-year-old iron hulled 275-foot steamship; one of four vessels built for the passenger runs between Boston, New York and Savannah. It was on the first leg of a regular trip from Boston, Captain Schuyler E. Wright at the helm, when the steamer hit Devils Bridge, a rocky shoal extending into Vineyard Sound off Cape Cod.

The collision tore the bottom out of the steamer. Captain Wright was unaware of the seriousness of the damage to his command when he ordered the engines reversed. As soon as the ship moved off into deep water it quickly sank so that only its bow, two masts and funnel were visible above the water line.

The steamer sank so fast there was no time to send a distress message. The boilers flooded so it lost steam. Not even the whistle could be blown. The ship listed sharply to port, but then settled in an upright position on the bottom. The accident happened just after 3 a.m. so most of the passengers were caught asleep in their cabins. Those that did get away quickly died of exposure in the bitter cold January waters.

Some people scrambled up into the rigging on the masts where they clung until they froze to death. Two lifeboats were launched, but both were swamped. One boat escaped with five people in it and the second drifted off empty. One man swam to the empty lifeboat and amazingly he was still alive and rescued the following morning by the tug Speedwell.
​
In the end, only 29 passengers and crew members escaped alive. Rescue efforts were not begun until the following morning when the wreck was seen from shore at the Gay Head Lighthouse. The local lifesaving station sent boats to the scene and the Revenue Cutter Samuel Dexter pulled alongside to assist in taking survivors from the rigging of the ship’s masts.

Captain Wright, who was among the survivors, was blamed by a board of inquiry for the disaster. His license as master and pilot was revoked.

The disaster left the Savannah Steamship Line in financial ruin. The company was taken over by the Ocean Steamship Company.

The City of Columbus was launched in 1878 for the Ocean Steamship Company. The vessel, and a sister ship, Gate City, were purchased by the Nickerson Company of Boston in 1882. They became the flagships for the newly established Boston and Savannah Steamship Company.

In weekly sailings between the two ports, the two steamships carried both passengers and cargo, mostly cotton from the south to the textile mills of New England, and manufactured goods from Boston southward.