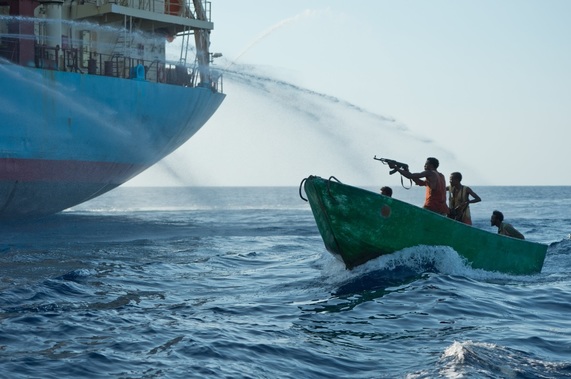 The Nation of Somalia, located on the Indian Ocean right at the so-called Horn of Africa, has been said to have been the origin of much of the piracy against ships of the world that pass that region for the past 20 years.

The piracy problem began with a few rag-tag armed characters who boarded ships from high-powered speedboats, seized money and whatever else of value they could find. It has since evolved to more sophisticated gangs that today hijack entire ships and their cargo and hold everything and everyone for ransom.

The United States has joined other nations in a battle against the al-Shabaab terrorist group in Somalia. But this group does not seem to be linked to the pirates. Thus the entire nation of Somalia is currently at unrest.

Settling ship seizures is usually a long and drawn-out ordeal in which ship’s crews may be held captive for weeks and sometimes months. In the end, the payoff has been rich. Ship owners, the cargo owners or insurance companies have been willing to pay sums reaching a million dollars or more to recover their crews and property valued at ten times that amount.

Pirating has become so popular along the African coast that various navies of the world, including that of the United States, have dispatched ships to patrol those waters. In 2009, with the incident involving the container ship Maersk Alabama and the capture of its captain, the pirates dared to take on a ship under the United States flag.

The French government has resorted to sending trained military personnel in to recover boats, ships and attempt to rescue hijacked crews.

The very act of catching and overpowering a large moving ship at sea from a small speedboat is clearly a dangerous and deadly operation for the pirates. It involves daring, agility, and a willingness to do what appears to be the impossible. Scaling the towering side of a steel hulled ship under power at sea cannot be easy, especially when crews see the pirates coming and are fighting back in whatever way they can. A United Nations treaty prevents commercial ships at sea from being armed.

So why would the rebels choose a dangerous trade like hijacking ships?

People in many African countries like Somalia have been living in extreme poverty for a very long time. Their nations have been racked by corrupt governments, war, overpopulation and famine. But families of the pirates that have been successful at even one hijacked ship that paid off well are suddenly seeing a new life style. They are building luxurious homes, deriving fine cars, filling their bellies with rich food and discovering how the wealthy people of the world have been living.

For these people, the risk of death on the high seas for a crack at such wealth is worth the effort. Once a few pirates were successful at this daring game, more and more young men were eager to get their part of the fabulous wealth floating past their shores every day on the fleets of mighty ships.

Somalia was formerly a British colony until 1960. Then it operated briefly under socialist rule until the regime of Mohamed Siad Barre collapsed in 1991. Since then the country has been suffering from tribal warfare, civil strife and general anarchy.

This set the stage for the al-Shabeeb terrorist organization and gangs of pirates now operating off the Somalian coast.

The International Maritime Bureau lists 21 vessels hijacked off Samalia in 2014. There were 442 sailors captured. Four sailors were killed and several were injured. This is only part of a world-wide problem of pirating that has been occurring, largely in African and Asian coastal waters.

How does the world deal with such a problem? Naval vessels from various nations are patrolling the waters heavily, which has helped in recent years. But the danger is still there.

Why don't merchant mariners return to the policies used during World War II, and start arming commercial ships? Most seagoing vessels now comply with a United Nations international rule that prohibits civilian ships from carrying arms into waters and ports of other countries. And there is good reason for prohibiting guns on ships at sea. Crew members are often hired to work aboard vessels in various world ports and then work together in confined quarters for weeks if not months at a time. Guns are not a good thing to be left lying around in such environments. Port authorities breath easier knowing that the crews of foreign vessels are unarmed when they dock.

Because of the increasing threat of piracy, however, many shipping companies are now hiring security when at sea. How this is worked out and the kind of weaponry allowed is not known.