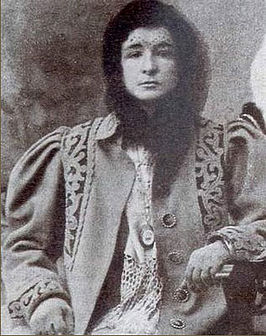 Enrigueta Marti was born in Sant Feliu de Llobregat, Spain, sometime before the turn of the century. As a young girl she moved to Barcelona where she worked as a maidservant and nanny before discovering that prostitution was a more lucrative business. She married Joan Pujalo, a painter, in 1895. The marriage failed because Enrigueta could not give up her occupation as a prostitute.

This was the official record of Enrigueta Marti’s life as a young woman, struggling to survive in an overcrowded city known for its seedy taverns, flophouses and brothels.

Journalist Josep Maria Huertas wrote that "it was common for forty to fifty people to live in one house." Children were victims of forced prostitution, sex trafficking, or they were enslaved in sweatshops, having been sold by their parents because of extreme poverty.

It was in this environment that Enrigueta Marti found her niche for gaining wealth and social status in what many called the "city of death." It was said that she lived a double life. By day she dressed as a beggar, literally begging for charity on the streets and seeking out abandoned children. She took in the children, at first prostituting them, and later murdering them.

Enrigueta did so well at this heinous vocation that she became relatively wealthy. At night she dressed in fine clothes and socialized with the wealthy of Barcelona. Thus she was living a double life. Her contacts among the higher echelon served to keep her out of legal trouble and thus hide her wicked murders for an estimated 20 years.

For example, in 1909, she was charged with operating a brothel that offered sexual services with children ranging from ages three to 14. Her contact with legal authorities of Barcelona, however, apparently helped her wiggle out of this jam. She was never convicted.

While she was prostituting and murdering children, Enrigueta also began practicing as a healer. She prepared special remedies from the remains of the children. It was said she used the fat, blood, hair and even the bones, which were ground into powder, for her formulas, which she sold at high cost to customers as salves, ointments and potions for treatment of a variety of diseases.

Since Enrigueta never kept a record of the children she murdered, no one knows the extent of her activities. Some believe she was possibly the deadliest killer in Spain’s history. During the years she operated, there was public fear that someone was kidnapping children.

She was caught in 1912 when she kidnapped Teresita Guitart Congost, a girl who was not an abandoned orphan. Her parents reported her missing and the city launched a massive search. A suspicious neighbor reported a girl matching Teresita’s description at Enrigueta’s flat on Ponent Street. Police investigated and found not only the Congost child, but another girl reported as Angelita living at the flat. Angelita did not know her last name and could not identify her parents.

Police recovered the children and found evidence of the horrors that had been going on there. They found bones and body parts, bloody knives, and bundles of children’s clothes, some of them bloody. Angelita told of watching Enriqueta kill a five-year-old boy named Pepito on the kitchen table.

Enriqueta was locked in the Reina Amalia jail where she was kept under constant guard because of her personal threats of committing suicide, and because of public indignation. She was never tried for her crimes, however. Prison inmates managed to lynch her in the jail on May 12, 1913.