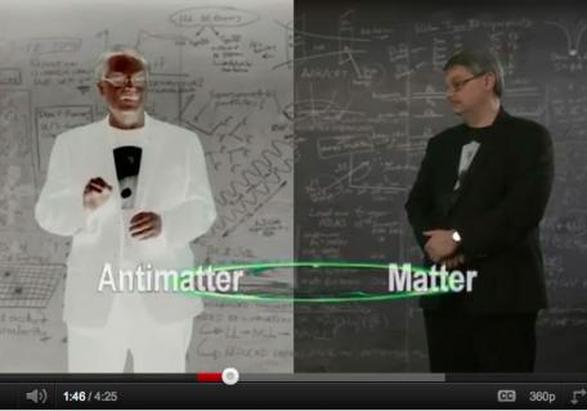 Fun With The Theory of Antimatter

Ever since Paul Dirac theorized the existence of anti-matter in 1928, there has been a sense among world physicists that all things in the universe must have an opposing counterpart to preserve a necessary symmetry.

The discovery of positrons, the anti-matter equivalent of electrons, and the subsequent discoveries of anti-protons and other anti-particles since Dirac have not only proven the existence of opposite forces, but opened the door to quantum physics.

Since Dirac, scientists have dared to consider the possibility of parallel universes, time travel, teleportation and many of the other things that once fell into the realm of science fiction.

This way of thinking may have been stimulated by science fiction writers who exploited the discovery of antimatter as a story plot. Writers, by-and-large, are creative right-brain users who have a way of tapping into the human collective for information that may still be a future event waiting to happen. Thus, we should not be surprised when science fiction plots created by Jules Verne and the many writers who followed start becoming reality. Remember it was Verne who envisioned submarines, men traveling by rocket to the moon, and time travel. Two out of three of his predictions, while total fiction in their day, have since come true.

After Dirac, the sci-fi writers had a field day with visions of anti-worlds, anti-stars and anti-universes, all made of antimatter. Some envisioned the explosive power of joining antimatter with positive matter as energy to propel starships that could travel faster than the speed of light.

When Robert Foot, a physics professor at the University of Melbourne, recently suggested that an anti-matter, or "mirror matter" meteorite caused the 1908 mystery explosion that toppled trees for miles in Tunguska, Siberia, he opened a new wave of thinking among scientists concerning the probability of parallel worlds.

Foot claims that mirror matter arises naturally as opposite symmetries of nature. Thus all matter has its invisible mirror image moving in an opposite direction. There seem to be two thoughts concerning anti-matter. One is that matter remains unchanged whether it moves forward or backward in time. The second thought is that nature doesn't distinguish between right and left-handed orientations.

In a UPI story, science writer Mike Martin quoted Foot as saying that he believes space and time are reversed for mirror matter. "Time moves backward and right-handed spatial coordinates have been interchanged with their left-handed counterparts."

Thus we have a contemporary scientist not only suggesting that a parallel universe exists, but saying it is one that is such an extreme opposite of the universe we live in, that even time is moving in the other direction.

This, of course, leads us into a strange hodge-podge of questions that, at least for now, have no answer.

For example, if the mirror universe is moving backward in time, what is happening to the mirror people there? Are they growing from old to young? Is that universe rushing toward a collapse which would be the opposite of a Big Bang? And if and when this happens, does the mirror universe explode outward and will a forward creation begin again, but on the positive-side? And if we are a mirror of that universe, does our universe then turn into the negative image, with time running backwards? In that case, what is now perceived by us as anti-matter might suddenly become positive matter.

If there must be a mirror consisting of anti-matter for all matter in this universe, then we all should have our exact mirror double on the other side of the mirror.

Lewis Carroll may have been onto something when he created the story of Alice In Wonderland, subtitled: Through The Looking Glass.