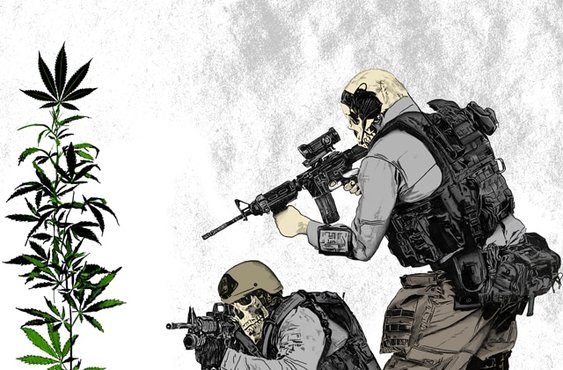 The Idiocy Of Staging Wars That Cannot Be Won

Just after 9-11, when George W. Bush launched his “war on terrorism,” we expressed a concern about the rash of so-called national wars against ideologies that lead down endless tunnels and never finding completion.

The thought then, and it has not changed one iota since, is that the war on terror looks much like America’s drug war, launched by the Nixon Administration.

After more than 45 years, the drug war continues, and we are no closer to winning it today than when it began. The Bush war on terror began with our attack on Afghanistan, was carried into Iraq, and this war also rages, some 16 years after we physically sent troops into battle against it.

The problem is that these are not wars at all. They are political assaults against invisible enemies. The people we are fighting can be working and living beside us, who look and act like us, but do not share the same political, social or religious beliefs.

Our neighbors might support the right to smoke marijuana in the privacy of their home, or carry a secret objection to the capitalistic system with which the United States does its business. The Moslem, on the other hand, may also live in our neighborhood, but he or she usually carry their religious belief on their sleeves, so-to-speak, since they choose to dress and appear differently than the social norm. And since we were allegedly attacked by Islamic terrorists on 9-11, we as a society tend to make the gross mistake of misjudging all Moslems as terrorists.

Our troops stationed in Afghanistan and Iraq have had the problem of determining just who the enemy may be among the farmers, shopkeepers and general citizens on the street. This is a new kind of gorilla warfare, where the enemy might be a woman, or even a child who walks into a military check-point with a bomb strapped on the waist. That they would blow themselves up to make their point is a strong political statement, one that our military, and our leadership, would be wise in attempting to understand.

This kind of warfare can wear down the most gallant of soldiers. And, indeed, it has. We are now hearing reports of mass suicide rates . . . some say up to 1,000 attempts a month . . . now occurring among the troops in Iraq.

There is a reason this conflict is leaving so many of our troops mentally troubled.

This kind of warfare is covert in its nature. There is no line of battle, with soldiers from two forces standing in mortal combat. You can't bomb this kind of enemy because even though you might identify one or two so-called soldiers, you can't kill him without taking out a school filled with innocent children, or a street filled with innocent citizens.

This is the kind of war where the enemy can emerge like a cockroach from the woodwork and do a lot of damage, killing a lot of people. When the commitment is so powerful it turns the enemy into willing suicide bombers, the deck is always stacked against us.

The Bush Administration identified Osama bin Laden as the mastermind behind the World Trade Center and Pentagon bomb attacks. There now is some doubt if bin Laden was really the "evil" brain behind this terrible assault on the United States. If he was involved he was the leader of a small and isolated gang of men who skillfully pulled off one of the most brilliant attacks against the United States since the Japanese bombed Pearl Harbor. For some odd reason, however, we never went after bin Laden until President Barack Obama sent forces into Pakistan to smoke him out years later. In the meantime we appeared to be attacking all of the wrong people and places without just cause.

We have sent our Naval ships, aircraft, troops and ground weapons in a show of great military strength. Yet our most sophisticated weaponry will not flush out gorilla fighters who have entrenched themselves into the rugged terrain in such a way they cannot be separated from the natives.

Afghanistan is not only a place filled with arid rocks, narrow cuts, caves and other things considered a soldier's nightmare, it is a nation that has been steeped in warfare for so many years, the Taliban are skilled in defending their homeland. Going in there with ground troops has proven to be an exercise in futility.

And if Bush thought our assault on Iraq would be a “piece of cake,” he had a surprise coming. While not hiding in difficult mountainous terrain, these gorilla fighters are concealed in the worst possible places, on the open street with all of the innocent citizenry. How do we fight that?

And in our zeal for waging war against Islamic forces, it appears that our military has created a deadly force of real Islamic terrorists who are now out to control the Middle East. They are operating in the name of ISIS. Their soldiers are appearing everywhere, even on U.S. soil now. What have we done? And to make matters even worse, we have elected a bafoon for our leader who knows nothing about warfare. With little understanding of what he is up against, Mr. Trump believes brute force will solve everything. This is a very dangerous man with his hands on some of the most deadly weapons in the world.

The fact that someone like Osama bin Laden existed and had dedicated followers means that there are a lot of people in the Islamic world who think just like him. They are people who, for either religious or political reasons, hate the United States with such fervor they are willing to strap bombs around themselves and blow themselves to smithereens just to kill as many Americans as possible.

The atrocities we have committed in Iraq, and Afghanistan since 9-11 have, indeed, stirred many more Islamic people to think just like that.

Hatred like that did not go away with the capture of Osama bin Laden. All we accomplished was martyrdom, which in itself could create even more reasons for that invisible enemy to want to attack, maim and kill Americans.

Terrorism, like drugs, has always been with us. It is just more visible now because we are living in an overpopulated and polluted world, and on a dying planet. There is an unseen conflict going on now as people run out of the essentials for living, like food, water and shelter. People living on the open ground, with no food, clothing and shelter, can easily be persuaded to hate neighbors who appear to be living in overabundance.

And this is how Americans appear to many of the poor and destitute people of the world. It is even how many impoverished Americans are thinking about the wealthy bankers, lawyers and corporate bosses who seem to be controlling the nation's purse strings.

And because our military is freely attacking the so-called "enemy" in various parts of the world, and doing it with bombs from unmanned controlled aircraft from overhead, we also are gaining a reputation as the real world terrorist.